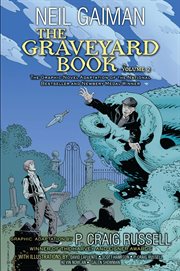 Russell concludes the two-part adaptation of Gaiman's Newbery Medal winner, encompassing the final three chapters of the novel. Bod, raised by the ghostly denizens of a graveyard, is a young adult now, yearning for knowledge of the world of the living. After a showdown with a pair of school bullies, nearly two-thirds of the book is given to chapter 7, in which Bod finally confronts the ancient order who murdered his family and overcomes them with his supernatural know-how and his innate courage and cleverness. A notable standout among the roster of talented artists behind the adaptation's lush, detailed illustrations, Scott Hampton cultivates atmosphere and characters both meticulously realistic and eerily ethereal, appropriately recalling Gray Morrow's gothic imagery from his time at Creepy. While the revelations are exciting and Bod's first step onto the limitless paths of adulthood are poignant, dividing the overall tale in two parts sometimes makes the story's momentum and lyricism feel a bit fragmented. Read together, however, as they were always intended, volumes 1 and 2 are a grand, elegant envisioning of Gaiman's dark imagination. HIGH-DEMAND BACKSTORY: It goes without saying the Gaiman is a powerhouse, and fans of the lauded first volume of the project will eagerly turn out for this artful conclusion. Copyright 2014 Booklist Reviews.

Gr 5 Up—Starting off where the first volume (2014) of Russell's graphic novel adaptation of Gaiman's The Graveyard Book (2008, both HarperCollins) ended, this title covers the second half of the original book. Orphan Nobody "Bod" Owens continues his education with the help of the ghostly graveyard residents, but soon experiences growing pains as he interacts more and more with the outside world of the living. His guardian Silas enrolls Bod in a human school, where the boy's sense of right and wrong battles against his instincts to remain forgettable to his classmates and teachers. In the following segment—the most action-packed and thought-provoking—Bod is reunited not only with his childhood friend Scarlett but also with the murderous Jack, responsible for his family's deaths. Now a teen, the protagonist grapples with feelings of revenge, honor, and even puppy love, all leading up to the work's climax. A bittersweet and hopeful conclusion will tug at the hearts of readers and followers of Gaiman and Russell's work. This volume's art style and pacing is more cohesive and even than the first, perhaps due to the longer chapters and the variety in settings. Underlying messianic themes and the striking juxtaposition of the evil clan of human assassins and the benevolent band of noble monsters begs classroom discussion. Essential reading for fans of Gaiman's original and those who enjoyed the first entry.—Shelley Diaz, School Library Journal [Page 111]. (c) Copyright 2014. Library Journals LLC, a wholly owned subsidiary of Media Source, Inc. No redistribution permitted.

A first volume in a two-part graphic novel adaptation of the Newbery Medal-winning tale features sumptuous illustrations by leading genre artists and follows the adventures of Bod, who is being raised by ghosts while avoiding the man who killed his family. 50,000 first printing. Simultaneous eBook.

Nobody "Bod" Owens, who lives in a graveyard and is being raised by ghosts, leaves the safety of the graveyard to attend school and investigate his family's murder.