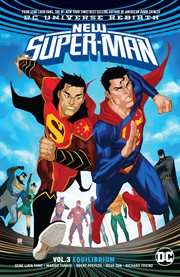 Shanghai is under siege. Emperor Super-Man rules the streets. And Kong Kenan-the New Super-Man-is running out of options. Kenan's mind is reeling from revelations about his parents. Meanwhile, his teammates in the Justice League of China are dropping one by one. And from across the globe, Task Force X Director Amanda Waller has sent in the one force that can stop the chaos and carnage from spreading: Harley Quinn, Deadshot and Killer Croc, a.k.a. the Suicide Squad! But the Emperor isn'...t the only Super-Man they've been licensed to kill. Unless Kenan acts fast, he'll become a casualty of war. Yet even as the struggle rages on, the New Super-Man is transported to Old Gotham City, to the era when the magic that fuels his powers began…and where his true enemy will reveal himself at last… New York Times best-selling writer Gene Luen Yang continues his acclaimed vision of comics' greatest heroes in New Super-Man Vol. 3, illustrated by Billy Tan and Brent Peeples. Plus, a story starring Laney Lan by acclaimed and award-winning writer Mariko Tamaki.