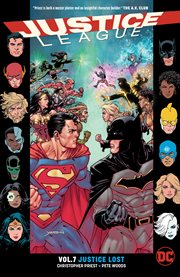 The team's greatest fan has turned into their greatest threat as he uses their secrets against them-all in the name of getting their focus back on what matters. To accomplish his twisted goal, he cripples the Watchtower and brings the Justice League literally back to Earth! The doomed headquarters has crashed in Africa, and a fight over salvage rights turns into a humanitarian crisis. The Red Lion, ruler of a ravaged country, has hired ruthless villain Deathstroke to intervene on his behal...f, and the team becomes the only thing standing in the way of a slaughter. The first Rebirth incarnation of the Justice League concludes, mixing action with human consequences as the team is forced to confront issues that can't be settled with superpowers.