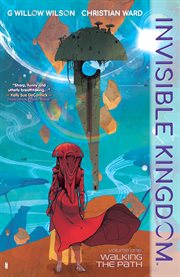 Hugo and World Fantasy Award-winning author G. Willow Wilson (Ms. Marvel, Wonder Woman) and Eisner winning artist Christian Ward (Black Bolt) team up for this epic new sci-fi saga! In a small solar system in a far-flung galaxy, two women-one a young religious acolyte and the other, a hard-bitten freighter pilot-uncover a conspiracy between the leaders of the most dominant religion and an all-consuming mega-corporation. On the run from reprisals on both sides, this unlikely pair must decide where... their loyalties lie-and risk plunging the world into anarchy if they reveal the truth.

Lux is the galaxy's biggest corporation, the Amazon of the spaceways. The crew of a lone freighter delivering their goods finds an irregularity in the cargo manifest and uncovers a massive illegal payoff. Meanwhile, the newest initiate of a religion that preaches against the corrupting influence of wealth and greed stumbles onto the recipient of that payout: the religion's mother superior. On the run, this "compelling little gang of misfits" comes together to find themselves only more desperately on the run, as all the forces that move civilization pursue them right into volume 2. Though Wilson's dialogue can occasionally feel canned and the overarching message about how people respond to truth is a little too clearly stated, her main characters—the wily freighter captain, the searching acolyte—are easy to root for, and the commerce and physical space of her worlds are easy to believe in. This last feature is powerfully fueled by Ward, who visualizes the shadowy doings with a somber phantasmagoria that offers a layered sense of this galaxy and its diverse peoples. Copyright 2020 Booklist Reviews.

Like a smart pop-art feminist Star Wars, this neon-drenched space adventure follows a band of rebels against the evil forces of Lux, a megacorporation that owns seemingly everything in a futuristic world. Captain Grix of the cargo ship Sundog and her motley crew inadvertently uncover a conspiracy at the heart of Lux and go on the lam, narrowly surviving one space battle after another. They find an informant and reluctant ally in Vess, a nun whose supposedly ascetic religious order has secret corporate ties. The convoluted thriller plot is overshadowed, though, by the imaginative worldbuilding and stunning art. Wilson (the Ms. Marvel series) creates a complex far-future society with its own hierarchies, prejudices, and alien cultures—a beautiful, dangerous place inhabited by tough schemers speaking their own version of hardboiled noir dialogue: "You die alone, and then they dump your body out an airlock." Artist Ward creates a universe of rainbow starfields, stylized cities, levitating monasteries, and aliens in ornate costume. By the end of the first installment, the plot remains somewhat scattershot, but fans of science fiction epics such as Saga will want to strap in for the longer ride with this promising new series. (Nov.) Copyright 2019 Publishers Weekly.

Eisner Winner for Best New Series of 2020! Hugo and World Fantasy Award-winning author G. Willow Wilson (Ms. Marvel) and acclaimed artist Christian Ward (2020 Eisner Winner for Best Painter/Digital Artist on this title) team up for an epic sci-fi saga!In a small solar system in a far-flung galaxy, two women—one a young religious acolyte and the other, a hard-bitten freighter pilot—uncover a conspiracy between the leaders of the most dominant religion and an all-consuming mega-corporation.On the run from reprisals on both sides, this unlikely pair must decide where their loyalties lie—and risk plunging the world into anarchy if they reveal the truth.Collects Invisible Kingdom #1–#5.