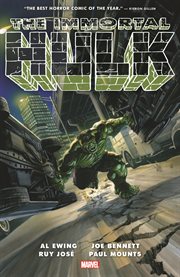 Also collects material from Avengers (2018) #684. Is he man or monster...or is he both? You know Bruce Banner. He's quiet, calm, never complains. He's a scientist who believes he can use the darkest elements of his personality to do good in the world. If someone were to shoot him in the head...all he'd do is die. But the horror lives deeper. And the horror refuses to die. When night falls, something other than the man gets up again. The horror is the Immortal Hulk! And though he c...annot die, the Hulk is being hunted yet again. By the government, by Alpha Flight, by the mysterious Shadow Base - and by the Avengers! But Bruce has even bigger problems. Something terrible has infected him. Something with unspeakable plans for humanity. And the only one who knows about this dark infection...is the Immortal Hulk!

Horror has a name. You'd never notice the man. He doesn't like to be noticed. He's quiet. Calm. If someone were to shoot him in the head...all he'd do is die. Until night falls - and someone else gets up again. The man's name is Banner. The horror is the Immortal Hulk! And trouble has a way of following them both. As Bruce Banner struggles to control the undying monster within, he finds himself hunted by his old friends and allies. But there are more sinister forces at work. Something terrible has infected Banner. A dark infection with unspeakable plans for humanity. The problem is only the Immortal Hulk knows about it! The Hulk is the one thing standing between the world of the living - and the terrors that await on the other side of the Green Door. COLLECTING: IMMORTAL HULK 1-10, MATERIAL FROM AVENGERS (2017) 684