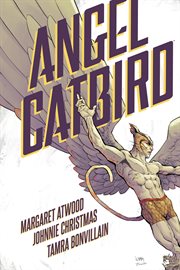 The most anticipated graphic novel of 2016! Internationally best-selling and respected novelist Margaret Atwood and acclaimed artist Johnnie Christmas collaborate for one of the most highly anticipated comic book and literary events of 2016! A young genetic engineer is accidentally mutated by his own experiment when his DNA is merged with that of a cat and an owl. What follows is a humorous, action-driven, pulp-inspired superhero adventure-with a lot of cat puns. Features bonus content by David ...Mack, Matt Kindt, Tyler Crook, and more!

Though it's probably not what you'd expect from the literary luminary, Atwood's foray into comic books is nothing if not spirited, imbued as it is with campy elements iconic of classic comics. Strig Feleedus is pumped for his new job working on a gene-splicing serum, even if his snooty boss is too demanding. But what happens next changes everything: after a calculated car crash involving Strig, his cat, a nearby owl, and a flask of the serum, he wakes up a new man. Well, a new man-cat-owl. Meanwhile, his sexy coworker and fellow cat-person, Cate, reveals a whole underworld of animal-human hybrids. It's a kooky story, but, given Atwood's inspiration, coupled with her passion for cat care and bird conservation (linked issues, she argues), that's hardly a surprise. Christmas' cinematic, action-rich panels nicely capture Atwood's story in rich colors and naturalistic figures. In keeping with the cat- and bird-care themes, footnotes with helpful tips appear every so often. It might not be groundbreaking stuff, but this nostalgic romp will likely delight many comics fans. Copyright 2016 Booklist Reviews.

Atwood's (The Handmaid's Tale; Oryx and Crake) fiction is often complex and challenging to read, but in her first foray into the world of graphic novels, her wickedly funny sensibility as a poet shines through. The tale starts with the transformation of Strig Feeledus, who is struck by a car and finds himself bathed in a secret formula the driver (his boss) was carrying. Strig is now able to morph into a half-cat, half-bird humanoid hybrid, and he realizes that there are others like him. He and his comrades, including Cate Leone and Count Catula, must be on guard against the ratlike Muroid, who looks like he won't be satisfied with anything less than world domination. Christmas is just the right illustrator for Atwood's narrative, not just because of his talent for drawing all things avian, rodent, and feline, but because of his acute understanding of how the human form changes when combined with these creatures. His illustrations also do an excellent job of showcasing Atwood's humor. (Sept.) Copyright 2016 Publishers Weekly.

Gr 7 Up—With her graphic novel debut, acclaimed author Atwood tells the story of Strig, an ordinary man who mutates into a strange owl/cat/human hybrid because of a secret formula. Featuring familiar tropes—an unlikely superhero and an evil villain who laughs maniacally as he plans to take over the world—the tale is reminiscent of classic superhero comics. Added to the mix are Cate, Strig's coworker and love interest, and an entire underground community of hybrid creatures. The artwork is colorful, vibrant, and filled with action. Atwood's introduction explains how and why this book was created, touching on her childhood interest in comics and her adult pursuit of bird conservation. Overall, this is a well-intentioned book that sometimes feels too purposeful. There are pieces of statistical information and website links about cats scattered throughout. Often, these facts feel preachy and overly educational (for instance, a reminder of "The Importance of Fixing Your Cat"), and the placement is at times jarring, breaking up the narrative flow. VERDICT An attractive but sometimes disjointed offering; for larger collections with superhero fans seeking additional materials.—Andrea Lipinski, New York Public Library Copyright 2017 School Library Journal.

"On a dark night, young genetic engineer Strig Feleedus is accidentally mutated by his own experiment when his DNA is merged with that of a cat and an owl"--

The Booker Prize-winning author of The Handmaid’s Tale writes her first graphic novel, a cat-centric all-ages New York Times bestselling adventure.On a dark night, young genetic engineer Strig Feleedus is accidentally mutated by his own experiment and merges with the DNA of a cat and an owl. What follows is a humorous, action-driven, pulp-inspired superhero adventure-- with a lot of cat puns.Lauded novelist Margaret Atwood and acclaimed artist Johnnie Christmas collaborate on one of the most highly anticipated comic book and literary events of the year!Published in over thirty-five countries, Margaret Atwood is one of the most important living writers of our day and is the author of more than forty books of fiction, poetry, and critical essays. Her work has won the Man Booker Prize, the Giller Prize, Premio Mondello, and more. Angel Catbird is her first graphic novel series.Atwood's The Blind Assassin was named one of Time magazine's 100 best English-language novels published since 1923 and her recent MaddAddam Trilogy is currently being adapted into an HBO television show by Darren Aronofsky