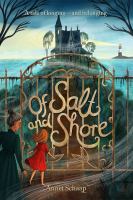 Of salt and shore

Every night Lampie, the lighthouse keeper's daughter lights the lantern which warns the ships away from the rocks, but when the light goes out one night, a ship is wrecked and Lampie is sent to the Admiral's Black House in disgrace--there she finds and befriends the Admiral's son, who was born with a tail, and together they are pulled into an adventure of mermen and pirates, and secret identities long concealed but soon to be revealed.

*Starred Review* Growing up in a village by the sea, Emilia, daughter of the lighthouse keeper and thus nicknamed Lampie, has heard the rumors about the monster in the Admiral's Black House. Now she's about to experience the Black House firsthand, all because she forgot to get the matches for the lighthouse lamp. As luck would have it, a storm blows in while the lamp is unlit and a ship wrecks on the rocks. Now, to pay off the damages, Lampie must work in the Black House for seven years while her father is locked in the lighthouse for the same period. Once in the mansion, Lampie's curiosity leads her to a locked tower, where she finds not a monster but Edward, the admiral's son, who is a merman. What ensues is a friendship that neither Lampie nor Edward ever expected, but one that rescues them for life. Divided into six sections, with intriguing artwork interludes, Schaap's story of family, friendship, and loyalty is humorous, scary, and filled with goodness. The captivating supporting cast of characters—a mix of realistic, fanciful, and stereotypical—makes for a delightful read. This is the first U.S. edition of Schaap's book, first published in the Netherlands to wide acclaim. Grades 4-7. Copyright 2020 Booklist Reviews.

With this haunting story, author-illustrator Schaap weaves together elements remniscent of Andersen's "The Little Mermaid" and Burnett's The Secret Garden to construct a gothic fable. After a shipwreck occurs during a storm, 11-year-old lighthouse keeper's daughter Emilia Waterman, called Lampie, is taken from her father, who is blamed for the wreck. Inhabited by a bare-bones staff serving an absentee admiral, her bleak new cliffside home, the Black House, is reportedly haunted by a monster. Lampie eventually discovers that the "monster" is Edward, the reclusive, abrasive son of the admiral, who has scaly skin and a fish's tail. Over time, she befriends the boy she nicknames Fish, who's determined to learn how to walk on land despite his "deformity." After a visit to a traveling fair reveals clues about Fish's parentage, Lampie and her new friend wind up in an escapade that will change their lives. Formal language and multiple perspectives result in a narrative distance that, while appropriate for a fairy tale, betrays a lack of focus as the story develops. The inclusion of an era-appropriate "freak show," though delicately handled, may still disturb some readers. Final art not seen by PW. Ages 8–12. (Oct.) Copyright 2020 Publishers Weekly.

Every night Lampie, the lighthouse keeper's daughter lights the lantern which warns the ships away from the rocks, but when the light goes out one night, a ship is wrecked and Lampie is sent to the Admiral's Black House in disgrace--there she finds and befriends the Admiral's son, who was born with a tail, and together they are pulled into an adventure of mermen and pirates, and secret identities long concealed but soon to be revealed.

For fans of The Hazel Wood, this middle grade novel takes the dark stuff of fairytales and crafts it into a powerful story of friendship and light. "Once I picked the book up, I didn’t set it down until I finished it with tears in my eyes. . ." —The New York Times Book Review Every evening Lampie, the lighthouse keeper's daughter, must light a lantern to warn ships away from the rocks, but one stormy night disaster strikes. The lantern is not lit, a ship is wrecked, and someone must pay.To work off her debt, Lampie is banished to the Admiral's lonely house, where a monster is rumored to live. The terrors inside the house aren't quite what she thought they would be--they are even stranger. After Lampie saves the life of the neglected, deformed son of the admiral, a boy she calls Fish, they form a close bond. Soon they are pulled into a fairytale adventure swimming with mermaids, pirates, and misfits. Lampie will discover the courage to fight for friendship, knowledge, and the freedom to be different.