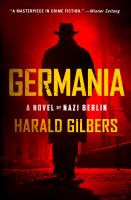 "From international bestselling author Harald Gilbers comes the heart-pounding story of Jewish detective Richard Oppenheimer as he hunts for a serial killer through war-torn Nazi Berlin in Germania. Berlin 1944: a serial killer stalks the bombed-out capital of the Reich, preying on women and laying their mutilated bodies in front of war memorials. All of the victims are linked to the Nazi party. But according to one eyewitness account, the perpetrator is not an opponent of Hitler's reg...ime, but rather a loyal Nazi. Jewish detective Richard Oppenheimer, once a successful investigator for the Berlin police, is reactivated by the Gestapo and forced onto the case. Oppenheimer is not just concerned with catching the killer and helping others survive, but also his own survival. Worst of all, solving this case is what will certainly put him in the most jeopardy. With no other choice but to futher his investigation, he feverishly searches for answers, and a way out of this dangerous game"--