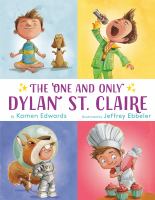 The one and only Dylan St. Claire

"Dylan St. Claire faces a week of anguish when he fails to get cast as the star in the school musical and lands the role of a squirrel instead"--

Edwards' debut provides a genuine and uniquely fabulous role model for children of all gender identities who delight in the performing arts. Dylan St. Claire is an extroverted theater kid who is beyond excited to star in an upcoming play about outer space, but when he doesn't land his desired role, Dylan is disappointed and confused—and readers will gladly accompany him on his ensuing adventure of perseverance, creativity, and optimism. The text bubbles with fun dialogue and strong narrative style, accompanied by Ebbeler's vibrant, detailed, action-packed illustrations of the shining Dylan, his dachshund Reba, and the out-of-this-world performance itself. Dylan is unabashedly proud of his imaginative and inventive streaks, and he's largely encouraged by those around him to chase his dreams. Through Dylan, Edwards and Ebbeler's sense of humor and empathy for performing arts kids shines through, and young readers will be motivated to reevaluate their understanding of belonging, teamwork, and personal pride. Grades K-3. Copyright 2020 Booklist Reviews.

K-Gr 2—When self-proclaimed star Dylan St. Claire is cast as a squirrel in his school's outer space play, he is very disappointed about his perceived rejection. A shy classmate convinces Dylan that the squirrel (an astronaut) is a very important role in the production, and from there on out he embraces it wholeheartedly. In this debut, Edwards presents Dylan as a zippy, clever character who is endearing and has a flair for the dramatic. Ebbeler's acrylic full spreads are bright and colorful, and include a diverse cast of characters. In the end, Dylan makes the role of the squirrel his own and his uniqueness is celebrated in the closing line. Perhaps there's another lesson in the fact that he steals the spotlight from his less outgoing friends who were given more coveted roles. VERDICT A pleasant story for outgoing children and natural born scene-stealers, though educators may want to point out that everyone deserves the opportunity to shine.—Clara Hendricks, Cambridge Public Library, MA Copyright 2020 School Library Journal.

A celebration of individuality, persistence and overcoming disappointment follows the experiences of a confident, emotionally expressive boy who finds ways to make the most of an opportunity when he is given a secondary role in the school play. Illustrations.

Meet elementary school superstar Dylan St. Claire in this laugh-out-loud book about a live-out-loud boy.Dylan's getting ready to audition for the school play, a musical about outer space, and he's got his sights set on playing the star . . . figuratively and literally. But when he ends up being cast as a squirrel, the real theatrics begin. Follow this extremely secure and unique boy through his daily dramas as he tackles each dilemma with pizzazz and skill.Giving a fabulous voice to the kind of boys who are under-represented in children's books, Dylan St. Claire confidently walks between "masculine" and "feminine" behavior: He cries openly and expresses his emotions but also cracks jokes and finds his inner strength when the going gets rough. Full of laughs and a one-of-a-kind character kids will cheer for, this hilarious story is a celebration of individuality, persistence, overcoming disappointment, and what it takes to be a true star.