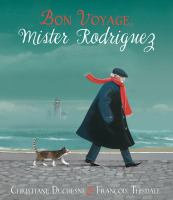 "Every day, the children in the village wait to watch the mysterious Mr. Rodriguez go by. His odd but charming ways are eventually revealed to be part of his preparation for the afterlife in this moving intergenerational tale."--

This surreal allegory unfolds on the streets of a seaside town as a group of children watch an elderly gentleman in an overcoat and a red scarf emerge "out of a narrow laneway." They see him every day, animals lingering nearby, but on Monday, something is different. "We held our breath. Was he waiting for someone?" A dove lands on Mister Rodriguez's shoe. He attaches a thread to her foot, and the two set off, the man half-floating above the cobblestones. Every morning that week, as the diverse children watch, Mister Rodriguez meets another animal—a goldfish, a weary sheepdog, a limping cat ("He tied a pair of wings to the old kitty's back")—and the pair rise in weightless, slow-moving flight. Acrylic and digitally altered artwork by Thisdale (Poetree) offers crisp, photographic realism, with misty skies of purple and green that suggest atmospheric otherworldliness. Though Montreal author Duchesne seems to be offering a way to think about the fate of beings who have died, a lack of clarity around whether the animals are initially living may confuse or alarm young readers. Ages 5–8. (Nov.) Copyright 2019 Publishers Weekly.

PreS-Gr 2—Children often notice things that adults do not, especially when they are out of the ordinary. Meet Mr. Rodriguez, an older man whose regular, predictable routine is familiar to the children in his small town. All at once, they begin noticing anomalies in his schedule and in his behavior: instead of walking, they see him floating down the street with a fishbowl on his head, and another time he skates down the street while pushing a dog in a sled. After several days of unusual behavior, Mr. Rodriguez disappears, ultimately appearing to the children one final time before he and his series of companions float off together into the sky. Crisp, vibrant illustrations form the foundation of this book, dominating each page and rendering the text secondary. Created with acrylics and digital media, the images include lifelike faces of children alongside detailed, richly colored illustrations. Though Mr. Rodriguez's behavior is unusual, the text only mildly remarks on that fact, remaining vague at the book's conclusion when the children determine that he may never return. The story line speaks to the reality of death in a whimsical way, introducing it by way of it occurring to someone known by the children in the book but not someone with whom they were particularly close. VERDICT Young children beginning to learn about the concept of death will find this book to be an easy introduction to this inevitability in their lives.—Mary Lanni, formerly at Denver Public Library Copyright 2019 School Library Journal.

Listening to rumors about an enigmatic elder who goes on a mysterious errand every afternoon, the children of a village whisper what they imagine about their neighbor, before discovering a heartwarming truth. Illustrations.

Listening to rumors about an elder who goes on a mysterious errand every afternoon, the children of a village whisper what they imagine about their neighbor, before discovering the truth.

A growing number of curious children discover their village’s most enigmatic figure has an unexpectedly beautiful job to do.