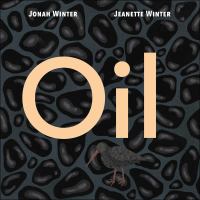 *Starred Review* On March 24, 1989, the Exxon Valdez ran aground off the coast of Alaska, spilling 11 million gallons of oil across 11,000 square miles of ocean. Jonah Winter recounts this incident in simple, straightforward text: thick, hot oil is pumped from deep underground into gigantic pipelines that cross miles of pristine wilderness to a port where it is transferred onto enormous ships. As one tanker glides past icebergs and sea creatures, it wrecks, causing crude oil to gush into the water, killing wildlife and spreading over miles of ocean and shoreline. Jeanette Winter's simple, uncluttered art depicts both the machinery of the oil industry and the natural beauty of the Alaskan Arctic and northwest reaches of the Pacific, filled with snow, tundra, wildlife, mountains, and icy ocean vistas. Two wordless spreads pause the narrative and allow young readers to fully absorb the leak's impact. One depicts the initial breach with oil flowing all around unsuspecting sea creatures; the other offers an overhead ocean view, revealing the enormity of the disaster. Perhaps most moving, however, are the illustrations that show seabirds and otters covered in oil. Concluding with an author's note, suggested readings, and a final spread that reminds readers that some of the spill remains uncontained, this is an accessible and important contribution to environmental science. Grades K-3. Copyright 2020 Booklist Reviews.

Marking the 30th anniversary of the Exxon Valdez oil spill in Alaska, lyrical prose and textured illustrations in layered colors distinguish this picture book treatment of the environmental disaster. Using repetition in both narration and artwork ("From deep inside the earth it comes,/ hot and black, black and hot"), the creators follow the initial extraction of crude oil and its pipeline journey through a fauna-rich wilderness, to the Exxon Valdez's grounding, spill, and deadly and far-reaching aftermath. Sleek and monochromatic, human-engineered items occur amid land- and seascapes populated with mottled, multihued wildlife—"across what had been/ unspoiled land, home to Native people." Scenes of rescue workers juxtapose depictions of oil-coated otters ("thousands of them, dead and dying"), underlining the importance of taking action in a calamity. Ending on a cautionary note, the seemingly clean beach is revealed as a deception: "If you lift a rock.../ oil/ seeps/ up." An author's note offers more spill facts, touching on culpability and a need for alternative energy sources. With this latest, the mother-son team behind The Secret Project again demonstrates an aptitude for clear and concise storytelling, here around detrimental alterations to the natural landscape. Ages 4–8. Author's agent: Ginger Knowlton, Curtis Brown Ltd. Illustrator's agent: Susan Cohen, Writers House. (Mar.) Copyright 2019 Publishers Weekly.

The mother-son team behind Diego recount the story of the Exxon Valdez oil spill and its devastating, ongoing effects on a vast region of ocean life. 25,000 first printing. Simultaneous eBook. Illustrations.

Mother-son team Jonah Winter and Jeanette Winter tell the story of the Exxon Valdez oil spill and its devastating and lingering effects in this poetic and timely picture book.Oil is drawn up from deep in the earth by machines, transported through pipelines, and pumped onto a ship that sails out to sea. When the ship crashes into a reef, the oil spills out over miles of ocean, covering rocks and animals alike. What will the consequences be?In this poignant and impactful picture book, celebrated picture book creators Jonah Winter and Jeanette Winter powerfully explore the devastating impact mankind can have on nature.