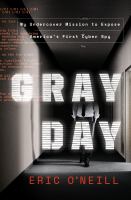 "A cybersecurity expert and former FBI "ghost" tells the thrilling story of how he helped take down notorious FBI mole Robert Hanssen, the first Russian cyber spy. Eric O'Neill was only twenty-six when he was tapped for the case of a lifetime: a one-on-one undercover investigation of the FBI's top target, a man suspected of spying for the Russians for nearly two decades, giving up nuclear secrets, compromising intelligence, and betraying US assets. With zero training in ...face-to-face investigation, Eric found himself in a windowless, high-security office in the newly formed Information Assurance Section, tasked officially with helping the FBI secure its outdated computer system against hackers and spies--and unofficially with collecting evidence against his new boss, Robert Hanssen, an exacting and rage-prone veteran agent with a disturbing fondness for handguns. In the months that follow, Eric's self-esteem and young marriage unravel under the pressure of life in Room 9930, and he questions the very purpose of his mission. But as Hanssen outmaneuvers an intelligence community struggling to keep up with the new reality of cybersecurity, he also teaches Eric the game of spycraft. Eric will just have to learn to outplay his teacher if he wants to win. A tension-packed stew of power, paranoia, and psychological manipulation, Gray Day is also a cautionary tale of how the United States allowed Russia to become dominant in cyberespionage--and how we might begin to catch up"--