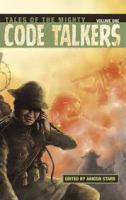 Tales of the mighty code talkers

"There has been a great deal of writing the past several decades about Native American Code Talkers of World War Two. The published works have been about Navajos and the tremendous contribution they made in the Pacific campaigns of the war. What is often overlooked is the role played in both World Wars by men of other tribes. There were Cherokee, Choctaw, Comanche, Creek and other tribal representatives with their languages involved as well. Tales of the Mighty Code Talkers, a graphic antho...logy of historically based stories, begins to fill that void. Seven stories -- two by the book's editor, Arigon Starr, dealing with Choctaw and Comanche code talkers, one by Roy Boney, Jr. on Cherokees, one by Johnnie Diacon on Creeks, and one by Jonathan Nelson on Navajos, plus stories from Lee Francis IV and Michael Sheyahshe -- provide an excellent rendering of the subject."