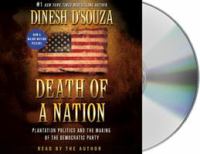 What does it mean to 'kill America'? It means killing what makes America unique and destroying the principles of the American founding. Here, best selling author Dinesh D'Souza shows how the left today is killing America by attacking its history, its culture, and its constitutional order in order to create a new nation based on progressive centralized control and mass dependency. And here's where it gets really interesting: D'Souza argues that in doing this, the Democrat...ic Party is applying on the national level the lessons learned by southern Democrats in the period of slavery and Jim Crow segregation. The modern Democratic Party is essentially a system based on the model of the southern plantation. It is paternalistic, breeds dependency on government, and wins elections by organizing voters into blocs rather than appealing to them as individuals, and it is leading America down the path toward its own demise.