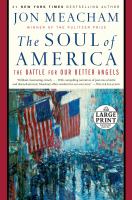 The soul of America The battle for our better angels

To better understand the present moment in American politics, we must look back at critical times in our history when hope overcame division and fear. Meacham shows us how what Abraham Lincoln called the "better angels of our nature" have repeatedly won the day during turning points in American history. Among other subject, he writes about the Civil War, Reconstruction, and the birth of the Lost Cause; the anti-Communist witch-hunts led by Senator Joseph McCarthy; and Lyndon Johnson...39;s crusade to finish the fight against Jim Crow.

1st floor Show me where

*Starred Review* Pulitzer Prize–winning presidential historian Meacham (Destiny and Power: The American Odyssey of George Herbert Walker Bush, 2015) has written this exceptionally fluent and stirring "portrait of hours in which the politics of fear were prevalent" in America out of profound knowledge, respect, and love for the nation and in the belief that understanding the past engenders perspective, guidance, and hope. By investigating the ways presidents have faced crises, Meacham, whose shining, cogent prose carries in its swift current mind-opening quotes from myriad sources, freshly defines the "soul of America"—its inclusiveness; charts the "eternal struggle" to preserve it; and tracks the courses presidents of different temperaments and politics followed to moral clarity, summoning, as President Lincoln so memorably expressed it, "the "better angels of our nature." Meacham vividly recounts acts of conscience and courage by Lincoln, Theodore and Franklin D. Roosevelt, Harry S. Truman, Dwight D. Eisenhower, Lyndon B. Johnson, and both Bushes. Here, too, are crucial accounts of dire threats against American democracy, including the impeachment of Andrew Johnson, who "chose to foment chaos and promulgate fears of conspiracy," and Senator Joseph McCarthy's false charges, fearmongering, and self-aggrandizing media manipulation. Meacham observes, "Reason prevailed. The system worked." But only because people spoke out. This engrossing, edifying, many-voiced chronicle, subtly propelled by concern over the troubled Trump administration, calls on readers to defend democracy, decency, and the common good. HIGH-DEMAND BACKSTORY: Best-selling Meacham's topic couldn't be more urgent, and his regular television appearances will further stoke interest. Copyright 2018 Booklist Reviews.

History does not actually repeat itself, but studying how countries have worked through trying times can be reassuring. This is the message that Pulitzer Prize-winning Meacham (political science, Vanderbilt Univ.; American Lion) provides in his exceptional new book. Here, Meacham recalls the struggles the United States has faced, including issues of racism, sexism, war, and pestilence. The author describes how, through what Lincoln famously called "the better angels of our nature," the country has prevailed and tried to move forward in the fervent belief that all Americans deserve guarantees of equality and justice. Using examples of challenging periods in U.S. history, such as Reconstruction, the resurgence of the Ku Klux Klan in the 1920s, and the anti-Communist witch hunts led by Joseph McCarthy in the 1950s, Meacham helps readers understand that the country has experienced difficulties before and will endure them again. VERDICT An excellent work by a skilled historian and worthy of all library collections.—Ed Goedeken, Iowa State Univ. Lib., Ames Copyright 2018 Library Journal.

America's centuries-long struggles about race, gender, and immigration are viewed through the lens of presidential calculation and convictions in this sonorous but shallow study. Vanderbilt historian Meacham (Thomas Jefferson: The Art of Power) examines presidential leadership on issues of civil rights and equality, from Ulysses S. Grant's vigorous action to protect freedmen from Ku Klux Klan attacks during Reconstruction to Lyndon Johnson's moral and political dynamism in enacting civil rights legislation in the 1960s. In between, he surveys presidential vacillations that mirrored the nation's contradictory moods: Theodore Roosevelt awkwardly married white supremacism with progressive stances on race and women's suffrage; Franklin Roosevelt defended democratic values against fascism but allowed the racist internment of Japanese-Americans during World War II; Eisenhower was largely missing in action in the fight against Joe McCarthy's inflaming of anti-foreign sentiment. Meacham's gracefully written historical vignettes don't break new scholarly ground, but they do highlight patterns that resonate with today's controversies over immigration and white nationalism. (In the 1920s, he notes, Klan membership numbered in the millions, and one nativist demagogue called for a "wall of steel" against immigration from southern Europe.) Unfortunately, Meacham's focus on presidents as moral exemplars and embodiments of America's political soul feels more like mysticism—and anti-Trump panic—than cogent analysis. Photos. (May) Copyright 2018 Publishers Weekly Annex.

Shows readers moments throughout the nation's history, including the Civil War, Reconstruction, and the Civil Rights movements, to guide them in understanding American politics today.

To better understand the present moment in American politics, we must look back at critical times in our history when hope overcame division and fear. Meacham shows us how what Abraham Lincoln called the "better angels of our nature" have repeatedly won the day during turning points in American history. Among other subject, he writes about the Civil War, Reconstruction, and the birth of the Lost Cause; the anti-Communist witch-hunts led by Senator Joseph McCarthy; and Lyndon Johnson's crusade to finish the fight against Jim Crow.

#1 NEW YORK TIMES BESTSELLER • Pulitzer Prize–winning author Jon Meacham helps us understand the present moment in American politics and life by looking back at critical times in our history when hope overcame division and fear. ONE OF OPRAH’S “BOOKS THAT HELP ME THROUGH” • NAMED ONE OF THE BEST BOOKS OF THE YEAR BY NPR • The Christian Science Monitor • Southern Living Our current climate of partisan fury is not new, and in The Soul of America Meacham shows us how what Abraham Lincoln called the “better angels of our nature” have repeatedly won the day. Painting surprising portraits of Lincoln and other presidents, including Ulysses S. Grant, Theodore Roosevelt, Woodrow Wilson, Franklin D. Roosevelt, Harry S. Truman, Dwight Eisenhower, and Lyndon B. Johnson, and illuminating the courage of such influential citizen activists as Martin Luther King, Jr., early suffragettes Alice Paul and Carrie Chapman Catt, civil rights pioneers Rosa Parks and John Lewis, First Lady Eleanor Roosevelt, and Army-McCarthy hearings lawyer Joseph N. Welch, Meacham brings vividly to life turning points in American history. He writes about the Civil War, Reconstruction, and the birth of the Lost Cause; the backlash against immigrants in the First World War and the resurgence of the Ku Klux Klan in the 1920s; the fight for women’s rights; the demagoguery of Huey Long and Father Coughlin and the isolationist work of America First in the years before World War II; the anti-Communist witch-hunts led by Senator Joseph McCarthy; and Lyndon Johnson’s crusade against Jim Crow. Each of these dramatic hours in our national life have been shaped by the contest to lead the country to look forward rather than back, to assert hope over fear—a struggle that continues even now.While the American story has not always—or even often—been heroic, we have been sustained by a belief in progress even in the gloomiest of times. In this inspiring book, Meacham reassures us, “The good news is that we have come through such darkness before”—as, time and again, Lincoln’s better angels have found a way to prevail.Praise for The Soul of America “Brilliant, fascinating, timely . . . With compelling narratives of past eras of strife and disenchantment, Meacham offers wisdom for our own time.”—Walter Isaacson “Gripping and inspiring, The Soul of America is Jon Meacham’s declaration of his faith in America.”—Newsday“Meacham gives readers a long-term perspective on American history and a reason to believe the soul of America is ultimately one of kindness and caring, not rancor and paranoia.”—USA Today