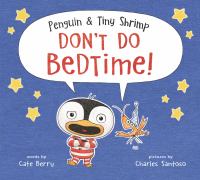 Penguin and Tiny Shrimp DO NOT have a bedtime story to share with you. There are no soft beds or cozy covers here. There are fireworks! And shark-infested waters!! This book will never make you sleepy! Not at all. Not even a little...--book jacket.

Since Penguin and Tiny Shrimp "don't do bedtime," they decide that this book will eschew the usual bedtime routines. There will be no teeth brushing or bath time, and the rubber ducky is told to "hit the road," while sleepy sheep are bid "sayonara." Instead, there are fireworks and crazy adventures: Penguin, Tiny Shrimp, and their friends run through the Serengeti and sail in shark-infested waters. However, exhaustion overtakes everyone, and Penguin and Tiny Shrimp climb wearily into bed and fall fast asleep. Uni-Hippo, the one remaining mostly awake party animal, asserts "This book will see you in the morning." Though the two pals do a fair amount of romping around, the soft colors of the digital illustrations and the fact that the background is minimal keep the action from getting overly frenetic. Stories about staving off bedtime are overabundant, and Penguin and Tiny Shrimp's attempts are hardly unique, but they are a beguiling pair, and this has a nice arc with a palatable conclusion. Much yawning will ensue—and that's a good thing. Grades K-2. Copyright 2018 Booklist Reviews.

Never mind that Penguin is wearing jammies and Little Shrimp a sleeping cap; the two let readers know up front that "this is not a bedtime book" and "we don't do bedtime!" Relayed entirely through speech balloons, the story is propelled by Penguin's flippant dismissal of bedtime rituals ("You won't catch us with sleepy sheep or wishing stars") and his diminutive sidekick's snappy quips ("Sayonara, Sheep!" says Tiny Shrimp to a herd of sheep expecting to be counted). Debut author Berry revs up her romp as the duo evades with gusto, leaping into a sky illuminated by fireworks, running from a lion in the Serengeti, swinging from vines in the rain forest, and sailing through shark-infested waters. Animals from each escapade join the cast to expand the menagerie, and all stage a raucous sing-along that's cut short by yawns and drooping eyelids—despite Penguin's assertion that "This book will never make you yawn." He's likely right: the digital art from Santoso (Peanut Butter & Aliens)—highlighted by comical images of the wide-eyed, open-mouthed title characters—energizes Berry's tactically understated text, often wryly turning it on its head. A buoyantly subversive antibedtime tale. Ages 5–8. Author's agent: Alexandra Penfold, Upstart Crow Literary. Illustrator's agent: Justin Rucker, Shannon Associates. (May) Copyright 2018 Publishers Weekly.

PreS-Gr 1—This may look like a bedtime book but it's not, and Penguin and Tiny Shrimp want readers to know this from the start. They might be dressed in pajamas, have just brushed their teeth, and may even be bouncing on a squishy cozy bed but they have no interest in sleep. They don't have time for sheep or stars, they want to run and jump and play; their eyelids are heavy but they still want to tell jokes and have a party. In the end they fall asleep, just as kids might guess, in that big cozy bed. Considering the sea of bedtime books in existence, the plot and the text doesn't stand out all that much. The digital illustrations resemble colored pencil and are the highlight of the book. VERDICT An additional purchase for large libraries or those looking to add to their sleepytime collections.—Shana Shea, Windsor Public Library, CT Copyright 2018 School Library Journal.

Penguin and Tiny Shrimp DO NOT have a bedtime story to share with you. There are no soft beds or cozy covers here. There are fireworks! And shark-infested waters!! This book will never make you sleepy! Not at all. Not even a little...--book jacket.

Penguin and Tiny Shrimp don't have soft beds or cozy covers, instead they have shark-infested waters and fireworks that are guaranteed to not make anyone tired.