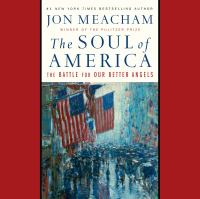 The soul of America The battle for our better angels

Pulitzer Prize-winning author Jon Meacham helps us understand the present moment in American politics and life by looking back at critical times in our history when hope overcame division and fear.

Distinguished historian Meacham brings his trademark equanimity and context to the highly pitched battle waged today between the Right and Left in American by reminding listeners that such battles have long been integral to the American narrative, from the very founding of the nation to the fights over slavery, women's suffrage, Nazism, Joseph McCarthy, and the civil rights movement. In detailing those and other signature events, Meacham argues in the end that Americans' "better angels" have generally prevailed—if not without long, bloody struggles—by the public's active engagement in the issues of the day. The author reads his book's lengthy introduction and its epilogue, but he turns over the rest of the duties to veteran reader Sanders. That's a loss, since Meacham has become such a thoughtful, well-known voice cutting through the mainstream din that his absence is felt; but Sanders' own soothing voice delivers a clean, evenhanded reading that will resound with partisans on any side. Copyright 2019 Booklist Reviews.

History does not actually repeat itself, but studying how countries have worked through trying times can be reassuring. This is the message that Pulitzer Prize-winning Meacham (political science, Vanderbilt Univ.; American Lion) provides in his exceptional new book. Here, Meacham recalls the struggles the United States has faced, including issues of racism, sexism, war, and pestilence. The author describes how, through what Lincoln famously called "the better angels of our nature," the country has prevailed and tried to move forward in the fervent belief that all Americans deserve guarantees of equality and justice. Using examples of challenging periods in U.S. history, such as Reconstruction, the resurgence of the Ku Klux Klan in the 1920s, and the anti-Communist witch hunts led by Joseph McCarthy in the 1950s, Meacham helps readers understand that the country has experienced difficulties before and will endure them again. VERDICT An excellent work by a skilled historian and worthy of all library collections.—Ed Goedeken, Iowa State Univ. Lib., Ames Copyright 2018 Library Journal.

#1 NEW YORK TIMES BESTSELLER &; Pulitzer Prize&;winning author Jon Meacham helps us understand the present moment in American politics and life by looking back at critical times in our history when hope overcame division and fear.NAMED ONE OF THE BEST BOOKS OF THE YEAR BY NPR &; The Christian Science Monitor &; Southern Living Our current climate of partisan fury is not new, and in The Soul of America Meacham shows us how what Abraham Lincoln called the &;better angels of our nature&; have repeatedly won the day. Painting surprising portraits of Lincoln and other presidents, including Ulysses S. Grant, Theodore Roosevelt, Woodrow Wilson, Franklin D. Roosevelt, Harry S. Truman, Dwight Eisenhower, and Lyndon B. Johnson, and illuminating the courage of such influential citizen activists as Martin Luther King, Jr., early suffragettes Alice Paul and Carrie Chapman Catt, civil rights pioneers Rosa Parks and John Lewis, First Lady Eleanor Roosevelt, and Army-McCarthy hearings lawyer Joseph N. Welch, Meacham brings vividly to life turning points in American history. He writes about the Civil War, Reconstruction, and the birth of the Lost Cause; the backlash against immigrants in the First World War and the resurgence of the Ku Klux Klan in the 1920s; the fight for women&;s rights; the demagoguery of Huey Long and Father Coughlin and the isolationist work of America First in the years before World War II; the anti-Communist witch-hunts led by Senator Joseph McCarthy; and Lyndon Johnson&;s crusade against Jim Crow. Each of these dramatic hours in our national life have been shaped by the contest to lead the country to look forward rather than back, to assert hope over fear&;a struggle that continues even now.While the American story has not always&;or even often&;been heroic, we have been sustained by a belief in progress even in the gloomiest of times. In this inspiring book, Meacham reassures us, &;The good news is that we have come through such darkness before&;&;as, time and again, Lincoln&;s better angels have found a way to prevail.Praise for The Soul of America &;Brilliant, fascinating, timely . . . With compelling narratives of past eras of strife and disenchantment, Meacham offers wisdom for our own time.&;&;Walter Isaacson &;Gripping and inspiring, The Soul of America is Jon Meacham&;s declaration of his faith in America.&;&;Newsday&;Meacham gives readers a long-term perspective on American history and a reason to believe the soul of America is ultimately one of kindness and caring, not rancor and paranoia.&;&;USA Today