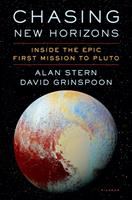 Chasing New Horizons Inside the epic first mission to Pluto

Shares a behind-the-scenes account of the science, politics, egos, and public expectations that shaped the New Horizons' mission to Pluto and beyond, citing the endeavor's boundary-breaking achievements and how they reflect the collective power of shared human goals.

When the planet Pluto was demoted in 2006 by the International Astronomical Union to a mere "dwarf planet," removing it from the same exalted cosmic club as Earth and Mars, many critics derided the reclassification as arbitrary and unscientific. One of them was Stern, a NASA principal investigator who earlier that year spearheaded the launch of the Pluto-bound New Horizons spacecraft. In the late 1980s, with probes just finishing flybys of Jupiter and Uranus, Stern and dozens of fellow aerospace experts formed the Pluto Underground to make sure our solar system's most distant planet wasn't slighted. Here, Stern and astrobiologist-coauthor Grinspoon recount the full fascinating story behind the New Horizons mission, including its many false starts, financing challenges, and engineering snafus. Traveling more than 3 billion miles at 32,000 miles per hour, the probe's findings revealed a wealth of exciting and unusual data about Pluto and its massive moon, Charon, which astronomers are still puzzling over. Stern and Grinspoon's account will appeal to space buffs and every fan of high-quality science writing. Copyright 2018 Booklist Reviews.

Stern is the principal investigator for the New Horizons mission, which sent a spacecraft past Pluto on July 14, 2015, and Grinspoon is a science writer and advisor to NASA. The authors give a compelling insider's look at the many challenges the mission encountered. Among the most difficult of these was the political infighting that occurred within both NASA and Congress, and the authors clearly convey the interplay between science, engineering, politics, and personalities that in the end led to the success of the mission. The decision to go with the Applied Physics Laboratory rather than the more established Jet Propulsion Laboratory was a case of David beating Goliath, and the many quotes from participants make for exciting reading. A similar book, Discovering Pluto (CH, Mar'19,56-2766), goes into much more detail about the history of the discovery of Uranus, Neptune, and Pluto but does not convey as fully the challenges and triumphs of the Pluto mission itself. Both books would be valuable addition to a library's collection, but Chasing New Horizons is preferable for its deeper discussion of the New Horizons mission. Summing Up: Highly recommended. All readers.--T. Barker, emeritus, Wheaton College (MA)Timothy Barkeremeritus, Wheaton College (MA) Timothy Barker Choice Reviews 56:07 March 2019 Copyright 2019 American Library Association.

Like NASA's Pioneer and Voyager missions before, the New Horizons mission to Pluto and the Kuiper Belt made the dream of exploring the outer reaches of the solar system a reality. Stern (planetary scientist; Pluto and Charon: Ice Worlds on the Ragged Edge of the Solar System), along with Grinspoon (astrophysicist; Earth in Human Hands: Shaping Our Planet's Future), recounts the story of the quest to study Pluto, from the planet's discovery in 1930 by Clyde Tombaugh to the visit in 2015 by NASA spacecraft New Horizons. Stern, who aspired to be a space scientist as a child, led the struggle to bring Pluto to the forefront of space exploration. Working with the Johns Hopkins University Applied Physics Laboratory and NASA, Stern and his team braved funding cuts, political fights, and bureaucratic red tape to plan, design, build, and fly the Pluto-bound spaceship. Interspersed among the scientific and engineering details of the mission are moving stories, such as Pluto discoverer Tombaugh's widow giving Stern some of the astronomer's ashes to put aboard the spacecraft. Stern also shares the emotional impact the endeavor had on himself and his colleagues. VERDICT Armchair space explorers and budding scientists will relish this inspiring aerospace adventure.—Donna Marie Smith, Palm Beach Cty. Lib. Syst., FL Copyright 2018 Library Journal.

Stern, the leader of the NASA mission to send the first probe to Pluto, and astrobiologist Grinspoon (Earth in Human Hands), who played a small part in the project, manage to make its many technical and bureaucratic roadblocks into a thrilling narrative, despite readers' awareness of their ultimate success. The science involved in sending the spacecraft, New Horizons, over three billion miles from earth is certainly impressive, representing over two decades of work by a legion of devoted scientists. Their diligence and creativity paid off spectacularly when, in 2015, New Horizons flew by Pluto at 32,000 miles per hour and transmitted spectacular images back to Earth, reawakening a dormant public fascination with space exploration and dramatically increasing scientific knowledge. Stern's hands-on and passionate involvement with the project from its inception enables him to make potentially dull material—seeking committee approvals, battling for funding, and managing relationships with superiors—as interesting as the science, and he provides a valuable perspective on the practical aspects of getting a venture like this off the ground. This is a future classic of popular science, full of twists and turns and unexpected heroes (a teenager's passion for Pluto helped influence NASA administrators at a crucial moment), with a dramatic and profound payoff. (May) Copyright 2018 Publishers Weekly Annex.

Shares a behind-the-scenes account of the science, politics, egos, and public expectations that shaped the New Horizons' mission to Pluto and beyond, citing the endeavor's boundary-breaking achievements and how they reflect the collective power of sharedhuman goals.

A New Horizons Principal Investigator and an award-winning NASA advisor share a behind-the-scenes account of the science, politics, egos and public expectations that shaped the New Horizons' mission to Pluto and beyond, citing the endeavor's boundary-breaking achievements and how they reflect the collective power of shared human goals.

Called "spellbinding" (Scientific American) and "thrilling...a future classic of popular science" (PW), the up close, inside story of the greatest space exploration project of our time, New Horizons’ mission to Pluto, as shared with David Grinspoon by mission leader Alan Stern and other key players.On July 14, 2015, something amazing happened. More than 3 billion miles from Earth, a small NASA spacecraft called New Horizons screamed past Pluto at more than 32,000 miles per hour, focusing its instruments on the long mysterious icy worlds of the Pluto system, and then, just as quickly, continued on its journey out into the beyond.Nothing like this has occurred in a generation—a raw exploration of new worlds unparalleled since NASA’s Voyager missions to Uranus and Neptune—and nothing quite like it is planned to happen ever again. The photos that New Horizons sent back to Earth graced the front pages of newspapers on all 7 continents, and NASA’s website for the mission received more than 2 billion hits in the days surrounding the flyby. At a time when so many think that our most historic achievements are in the past, the most distant planetary exploration ever attempted not only succeeded in 2015 but made history and captured the world’s imagination.How did this happen? Chasing New Horizons is the story of the men and women behind this amazing mission: of their decades-long commitment and persistence; of the political fights within and outside of NASA; of the sheer human ingenuity it took to design, build, and fly the mission; and of the plans for New Horizons’ next encounter, 1 billion miles past Pluto in 2019. Told from the insider’s perspective of mission leader Dr. Alan Stern and others on New Horizons, and including two stunning 16-page full-color inserts of images, Chasing New Horizons is a riveting account of scientific discovery, and of how much we humans can achieve when people focused on a dream work together toward their incredible goal.