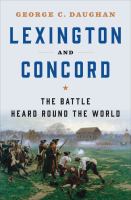 Lexington and Concord The battle heard round the world

Daughan (Revolution on the Hudson, 2016) presents an argument for an economic motivation for the colonial drive to independence from Great Britain in this well-researched account of events leading to the Battle of Lexington and Concord, which started the American Revolution. The detailed narrative draws from journals and correspondence from British and colonial officials and top military officers and enlisted men from both sides to convincingly present the objective facts. Daughan's thesis that the colonists feared being reduced to poverty through taxation is not especially well developed. But he does thoroughly catalog the ineptitude and hubris of His Majesty's government in its drive to secure Massachusetts. This is a strong feature of the book, as is the author's play-by-play description of the battle. Lexington and Concord is a worthy resource for history buffs seeking a closer look at what drove the start of the American Revolution and "the battle heard round the world." A fine addition to American-history collections and perfect for displays about that essential time. Copyright 2018 Booklist Reviews.

The battles at Lexington and Concord, MA, sparked the American War for Independence from Britain. Daughan, winner of the Samuel Eliot Morison Award for Naval Literature and author of works such as If By Sea, writes a diplomatic and military history of the war's first battles, while also including the economic and social foundations of the patriots' motives. British General Thomas Gage, military governor of Massachusetts Bay, understood the dangers the rebellion posed, but King George and other British officials ignored him. According to Daughan, Gage was largely responsible for the fight that followed, failing to cooperate with Adm. Samuel Graves of the Royal Navy and blundering his way through the encounter. The patriots, on the other hand, benefited from sound preparation and leadership, with veteran Colonel James Barrett coordinating much of the action. Daughan provides a patriot-centric view, emphasizing bravery among the colonial militia and the British redcoats' brutality. British soldiers bayoneted a number of patriots, including the wounded, but the rebels treated captured British stragglers well. The maps are useful but could have been more detailed. VERDICT Overall, this sound, accessible history is geared toward general audiences, but it will also appeal to military historians and Revolutionary War enthusiasts.—Matthew Wayman, Pennsylvania State Univ. Lib., Schuylkill Haven Copyright 2018 Library Journal.

The award-winning historian and author of "If By Sea" reinterprets the battle that launched the American Revolution, arguing that the war was based as much in economic concerns as political ones and that most militiamen volunteered on behalf of their livelihoods and in protest of serf-like living conditions.

Reinterprets the battle that launched the American Revolution, arguing that the war was based as much in economic concerns as political ones and that most militiamen volunteered on behalf of their livelihoods and in protest of serf-like living conditions.

This book for general readers and others details the Battle of Lexington and Concord in Massachusetts at the start of the American Revolution. It demonstrates that economics reasons were an important cause of the battle and the war. The book notes the impact of Benjamin Franklin’s letters describing poverty in England and shows that the British underestimated the Colonial militias. There is special focus on details of the lives of the Massachusetts militiamen. The book contains b&w historical illustrations and maps. Annotation ©2018 Ringgold, Inc., Portland, OR (protoview.com)

George C. Daughan’s magnificently detailed account of the Battle of Lexington and Concord challenges the prevailing narrative of the American War of Independence. It was, Daughan argues, based as much in economic concerns as political ones. When Massachusetts militiamen turned out in overwhelming numbers to fight the British, they believed they were fighting for their farms and livelihoods, as well as for liberty.Benjamin Franklin was not surprised by this widespread belief. In the years prior to the Revolution, Franklin had toured Great Britain and witnessed the wretched living conditions of the king’s subjects. They wore rags for clothes, went barefoot, and had little to eat. They were not citizens, but serfs. Franklin described the appalling situation in a number of letters home. In the eyes of many American colonists, Britain’s repressive measures were not seen simply as an effort to reestablish political control of the colonies, but also as a means to reduce the prosperous colonists themselves to the serfdom described in the Franklin letters.Another key factor in the outcome of this historic battle, according to Daughan, was the scorn British officers had for colonial fighters. Although the British officers had fought alongside colonial Americans in the ferocious French and Indian War, they failed to anticipate the skill, organization, and sheer numbers of the colonial militias. Daughan explains how British arrogance led them to defeat at the hands of motivated, experienced patriot fighters determined to protect their way of life.Lexington and Concord