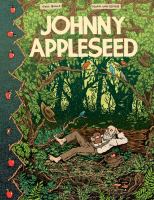 "This is a graphic biography of the green dreamer of the American Frontier, the legendary John Chapman, from Brown University scholar Paul Buhle (Red Rosa) and award-winning cartoonist Noah Van Sciver (The Hypo: The Melancholic Young Lincoln). John Chapman, aka Johnny Appleseed, made himself the stuff of legend by spreading the seeds of apple trees from Wisconsin to Indiana. Along with that, he offered the seeds of nonviolence and vegetarianism, good relationships with Native Americans, an...d peace among the settlers. He was one of the New World's earliest followers of the Swedish theologian Emanuel Swedenborg. The story of John Chapman operates as a counter-narrative to the glorification of violence, conquest, and prevailing notions of how the West was Won. It differentiates between the history and the half-myths of Johnny Appleseed's life and work: His apples, for instance, were prized for many reasons, but none more so than for the making of hard cider. He was also a real estate speculator of sorts, purchasing potentially fertile but unproven acres and then planting saplings before flipping the land. Yet, he had less interest in financial gain--and yes, this is an accurate part of the mythology--than in spreading visions of peace and love. Johnny Appleseed brings this quintessentially American story to life in comics form. Black & white illustrations throughout"--

Academic Buhle (Bohemians: A Graphic History) and indie cartoonist Van Sciver (Fante Bukowski) examine an American folk hero's legacy in this graphic novel. A legend of frontier folklore, John "Johnny Appleseed" Chapman wandered through Indiana, Massachusetts, Ohio, and Pennsylvania, until his death in 1845. An itinerant with a knack for land speculation, he planted and traded apple seeds, took only what he needed and gave away what he didn't, and consequently left little behind but his trees, the accounts of those who encountered him, and a gentle legacy of naturalistic spirituality. This dearth of records leaves Buhle to explore the context rather than the content of Chapman's life as he meanders through history and topics that relate to our "green spirit," among them the role of apples in different civilizations, the various religious movements in early America, and the cosmic theology of Emanuel Swedenborg. Van Sciver's rough indie aesthetic adds texture to Buhle's often dry and academic text, which will appeal mostly to readers interested in an alternative perspective on this period of American history. (Sept.) Copyright 2017 Publisher Weekly.