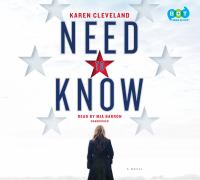 Need to know A novel

In pursuit of a Russian sleeper cell on American soil, a CIA analyst uncovers a dangerous secret that will test her loyalty to the agency--and to her family.

Imagine CIA analyst Vivian Miller's shock when she opens a file containing photos of a Russian sleeper cell operating within the U.S. and recognizes an image of her husband, Matt. When Vivian is unsuccessful in deleting the file, she reluctantly agrees to solve the problem by loading a Russian-provided flash drive onto a CIA server. Narrator Barron's quiet yet intense rendering of Vivian's inner thoughts reveals her dilemma as she feels caught between loyalty to her family and her country: Is her husband a spy? If so, should she turn him turn in? Then the blackmail begins, as Russian-accented Yuri harangues her to load another drive while laughingly describing in detail what could happen to her children. Matt then convinces her that to do so will end their problem. But hearing her children's high-pitched voices increases her fear, and even her mother's cheery exuberance can't lift her spirits. Written by a former CIA agent, this debut novel chillingly coincides with the political implications of Russia's tampering with the 2016 election. Copyright 2019 Booklist Reviews.

Former CIA analyst Cleveland's debut novel is premised on a big "what if." What if you found out after a decade that the person you married and built a life and a family with was not only keeping a huge secret but actually had entered your life just to learn the secrets of your job? This is exactly what CIA counterintelligence analyst Vivian Miller learns when she uncovers the identities of five Russian sleeper agents and one of them is her husband. By mixing the action of a spy thriller and the internal dialog of a loving wife and mother, Cleveland sends listeners on a journey into the private hell that Vivian's life becomes. Narrator Mia Barron gives a performance that is understated yet elegant. VERDICT This very detailed, exciting thriller is highly recommended. ["A rousing Act II to the excitement of TV's The Americans and the novels of Chris Pavone": LJ 10/1/17 starred review of the Ballantine hc.]—Scott R. DiMarco, Mansfield Univ. of Pennsylvania Lib. Copyright 2018 Library Journal.

NEW YORK TIMES BESTSELLER &; FINALIST FOR THE ITW THRILLER AWARD &; Perfect husband. Perfect father. Perfect liar? &;Terrific.&;&;John Grisham &;Superb.&;&;Lee Child &;Breathtaking, heart-pounding.&;&;Louise Penny &;A fast-paced, relentlessly gripping read.&;&;Chris Pavone Vivian Miller. High-powered CIA analyst, happily married to a man she adores, mother of four beautiful children. Until the moment she makes a shocking discovery that makes her question everything she believes.   She thought she knew her husband inside and out. But now she wonders if it was all a lie. How far will she go to learn the truth?  And does she really . . .   . . . NEED TO KNOW?Film rights sold to Universal Pictures for Charlize Theron &; Rights sold in more than 20 markets &;Shaping up to be one of the year&;s biggest new thrillers.&;&;Entertainment Weekly  &;So timely . . . Think of the perfect mix of Homeland and The Americans. . . . Need to Know needs to be read by all who relish spy novels. As entertaining as it is informative and as irresistible as it is impossible to put down.&;&;Providence Journal  &;Pulse-pounding.&;&;O: The Oprah Magazine  &;Accomplished . . . a nonstop thriller tapping into a hot mix of contemporary digital counterintelligence, old-school spying and ageless family drama.&;&;Shelf Awareness &;An early contender for next year&;s Gone Girl.&;&;GQ (UK)    &;The Russia page-turner that should be on everyone&;s list.&;&;New York Post