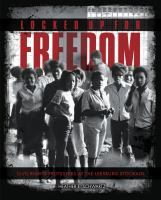 Locked up for freedom Civil rights protesters at the Leesburg Stockade

"In 1963, more than 30 African American girls, ages 11-14, were arrested for taking part in Civil Rights protests in Americus, Georgia. Then came a greater ordeal: confinement in a Civil-War-era stockade."--Provided by publisher.

In 1963, a group of teenage girls who had been jailed for their role in civil rights protests were sent to a Civil War–era prison in the heart of Georgia. Crowded into one cell, at least 30 girls between the ages of 11 and 15 served their time in squalid conditions with little to eat or drink, no way to keep clean, and no contact with the outside world. Schwartz utilizes a tremendous trove of primary source material, and recollections from the girls who served time in Leesburg, to make up the bulk of the narrative. Additionally, photographs taken by SNCC photographer Danny Lyon capture the reprehensible conditions and the indomitable spirit of the young inmates. It will be impossible for readers not to feel a sense of relatability with the girls in the photographs, who were so much younger than the more famous heroes of the civil rights era, but no less resolute or brave. Copyright 2017 Booklist Reviews.

Gr 6 Up—In the late summer of 1963, more than 30 African American girls were locked up in an abandoned stockade in Leesburg, GA. They ranged in age from 11–16 years old, and all had participated in some form of protest in relation to the growing civil rights movement. Schwartz dives deep into this particular episode, offering up first-person accounts of the circumstances leading to their imprisonment and the horrific conditions they endured at the stockade. Quotes from interviews and photographs are woven into the narrative, offering details about clogged toilets, bug-infested mattresses, and unhygienic living conditions. Schwartz makes clear that though many young people expected to, and did, go to jail for their participation in marches and protests, this specific situation was unique and particularly heinous because of the conditions and the length of time they were held—not to mention they had no contact with the outside world and their families were not informed of their whereabouts. Introductory chapters provide historical context, thus making this a solid choice for students learning about the civil rights movement. The writing is accessible and the accounts compelling. VERDICT A story that needs to be told. The solid research and concise narrative make it a fine addition to most student-centered collections.—Jody Kopple, Shady Hill School, Cambridge, MA Copyright 2017 School Library Journal.

In 1963, more than 30 African-American girls ages 11 to 16 were arrested for taking part in Civil Rights protests in Americus, Georgia. They were taken without their families' knowledge to a Civil War–era stockade in Leesburg, Georgia, where they were confined in unsanitary conditions and exposed to brutal treatment. Over the following weeks, their commitment to the fight for equality was put to the test. Combining historical research and personal interviews with several of the girls, Heather E. Schwartz brings this true story of the Civil Rights Movement to life.

"In 1963, more than 30 African American girls, ages 11-14, were arrested for taking part in Civil Rights protests in Americus, Georgia. Then came a greater ordeal: confinement in a Civil-War-era stockade."--Provided by publisher.

Recounts how, in 1963, more than thirty African American girls aged eleven to fourteen were arrested for taking part in civil rights protests in Americus, Georgia, and then faced a greater ordeal--confinement in a Civil-War-era stockade.