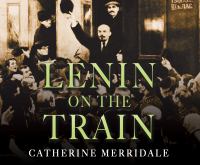 Lenin on the train

A gripping account of Lenin's fateful 1917 rail journey from Zurich to Petrograd, where he ignited the Russian Revolution and forever changed the world.

Presents a meticulously researched account of Lenin's fateful 1917 rail journey from Zurich to Petrograd, where he ignited the Russian Revolution and forever changed the world.

A gripping account of how Lenin's 1917 train ride to Petrograd ignited the Russian Revolution.

In April 1917, as Tsar Nicholas II's abdication sent shockwaves across war-torn Europe, the future leader of the Bolshevik revolution, Vladimir Lenin, was far away, exiled in Zurich. To lead the revolt, Lenin needed to return to Petrograd immediately. But to get there, he would have to cross Germany, which meant accepting help from the deadliest of Russia's adversaries and betraying his homeland. Bringing to life a world of counter-espionage, intrigue, wartime desperation, illicit finance, and misguided utopianism,Catherine Merridale provides a riveting account of this pivotal journey as well as the underground conspiracy and subterfuge that went into making it happen.