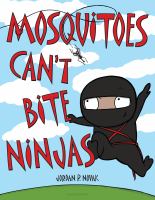 Mosquitoes are sneaky and quick and can bite all kinds of other people, but they are no match for a ninja.

A young ninja explains why ninjas don't get bitten by mosquitoes in this ninja-versus-mosquito exposé. While all other humans seem to be fair game for mosquitoes, the bloodsucking insect is no match for the ninja's quick, stealthy movements. In true Wile E. Coyote–Road Runner fashion, the mosquito moves in for the attack just as the ninja quickly sidesteps, causing the mosquito to crash into an object just beyond the recently vacated space. With eye-catching, brightly colored ink drawings featuring simple, cartoon-style figures that are big enough for all to view clearly, this is naturally appealing for audiences of any size. Full-page spreads are gracefully balanced with equally appealing spot art, the text is minimal with five words or less on most pages, and ample action is involved with all the sneaking and quick movement. The ending offers a little twist—while mosquitoes can't bite ninjas, the same can't be said for ninjas biting mosquitoes!—and this would be great fun for a read-aloud. Copyright 2017 Booklist Reviews.

Mosquitoes are sneaky, quick, persistent—and no match for debut talent Novak's kid ninja. Moving calmly and stealthily through a summery park landscape, her young warrior skillfully dodges the bites that afflict lesser mortals, then catches its insect nemesis with chopsticks made from twigs while maintaining a perfect lotus pose. The ninja has the upper hand when it comes to character, too: unlike mosquitos, "Ninjas don't bite people," notes Novak, as her ninja instructs a younger sibling. "They learn not to when they're baby ninjas." This is more of an extended skit than a story (at one point, the mosquito looks directly at readers and shushes them as it moves in for the bite), and mosquito bites may be no laughing matter to many parents these days. Still, Novak's minimalist text shows admirable restraint, and her ninja is a comically commanding character, with expressive, saucer eyes (the only feature not wrapped in black) reminiscent of a silent film star. Flat, saturated colors and large-scale cartooning give the book the feel of an oversize comic. Ages 2–5. Agent: Jennifer Rofé, Andrea Brown Literary. (Mar.) Copyright 2016 Publisher Weekly.

PreS-Gr 1—With a simple and straightforward story line, Novak's work features digital cartoon artwork boldly showing that mosquitoes are no match for ninjas. The pesky bugs bite all kinds of people in a succession of images: swimmers, chefs, "old ladies with blue hair," babies, but not ninjas. Ninjas are sneakier and quicker than their would-be attackers. They learn not to bite when they are babies. However, mosquitoes don't count on ninjas being hungrier than they are! While eating at a picnic, a smiling ninja is shown biting into a mosquito stuck in the jelly on his sandwich—a hilarious and gross twist. Novak's art is clean and includes small details to delight independent readers, while the patterning of text makes this title ideal for sharing aloud. VERDICT A justifiable purchase for libraries where readers can't get enough ninja tales.—Rachel Zuffa, Racine Public Library, WI Copyright 2017 School Library Journal.

Giggles ensue when a little ninja uses his quick and sneaky skills to elude a mischievous, biting mosquito. A first picture book.

Mosquitoes are sneaky and quick and can bite all kinds of other people, but they are no match for a ninja.

With all the humor and appeal of Bob Shea and Jory John, here's a giggle-worthy, buzz-worthy picture book about one little ninja who won’t let a hungry mosquito snack on him!