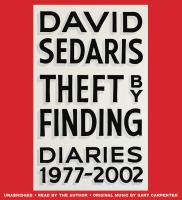 For nearly four decades, David Sedaris has faithfully kept a diary in which he records his thoughts and observations on the odd and funny events he witnesses. Anyone who has attended a live Sedaris event knows that his diary readings are often among the most joyful parts of the evening. But never before have they been available. Now, Sedaris brings listeners his favorite entries. From deeply poignant to laugh-out-loud funny, these selections reveal with new intimacy a man longtime readers only t...hink they know.

*Starred Review* Avid Sedaris fans would likely commit 14 hours to listen to him reading a grocery list, but 14 hours of him reading selections of his own diaries? Sweet sassy molassey! As Sedaris explains, this collection is carefully curated—which ends up being part of its charm. Early entries are more traditional, documenting things that happened or oddities observed. Later, his diary serves as a place to work out some of the episodes he will later turn into essays. One of the wonderful things about experiencing this book on audio is, of course, Sedaris' wry and weary delivery. When depicting conversations, he'll do an accent or impersonation if he knows he can do it well. His brother and father get their own personas, for example, while he quotes others in his own voice. Listening to him mimic an usher at a movie theater or an IHOP waitress highlights what an exquisite observer he is. Vocalizing not just dropped g's or inventive profanity, Sedaris also captures the pauses and pace that give a great line its punch. And passages covering 25 years remind listeners that Sedaris wasn't an overnight success. There were lean, apple-picking, house-painting, make-a-box-of-pancake-mix-last-a-week years. Lucky us—he wrote down every one. Copyright 2019 Booklist Reviews.

Humorist Sedaris's first volume of diaries offers his unique point of view in snippets from the years 1977-2002. The entries are irregular in length and veer wildly from topic to topic. In them you will find funny snark; portraits of ugly racism, sexism, and homophobia; Sedaris's drug use; life as a teacher, writer, and odd-job man; reliance on his parents; watching his sister's (Amy Sedaris) success; and his own slow journey toward his own. There are usually no connections between the short entries, and the author himself suggests that this is the kind of material to dip into at random and just listen for a while. Sedaris reads the entries himself, giving them authenticity and the intended delivery. With its eclectic, disconnected, and brief pieces, this is the ideal library checkout. However much of the audiobook the listener is able to get to before it's due back, it will be a rewarding experience. VERDICT Recommended for aspiring authors, NPR listeners, people interested in late 20th-century experiences, and, of course, fans of snark. ["For Sedaris fans, this is a primary source not to miss, but even the more casual reader will be drawn in, as the author comes into his own as a writer and a person": LJ 4/15/17 review of the Little, Brown hc.]—Tristan Boyd, Austin, TX Copyright 2017 Library Journal.

Shares the author's favorite diary entries, providing a look into the mind of a comic genius.

An anthology of personal favorite diary entries by the best-selling author of Let's Explore Diabetes with Owls features excerpts that have inspired his famed autobiographical essays and shares insights into the intimate arenas of his life. Read by the author. Simultaneous.

One of the most anticipated books of 2017: Boston Globe, New York Times Book Review, New York's "Vulture", The Week, Bustle, BookRiotAn NPR Best Book of 2017An AV Club Favorite Book of 2017A Barnes & Noble Best Book of 2017A Goodreads Choice Awards nomineeDavid Sedaris tells all in a book that is, literally, a lifetime in the making.For forty years, David Sedaris has kept a diary in which he records everything that captures his attention-overheard comments, salacious gossip, soap opera plot twists, secrets confided by total strangers. These observations are the source code for his finest work, and through them he has honed his cunning, surprising sentences.Now, Sedaris shares his private writings with the world. Theft by Finding, the first of two volumes, is the story of how a drug-abusing dropout with a weakness for the International House of Pancakes and a chronic inability to hold down a real job became one of the funniest people on the planet.Written with a sharp eye and ear for the bizarre, the beautiful, and the uncomfortable, and with a generosity of spirit that even a misanthropic sense of humor can't fully disguise, Theft By Finding proves that Sedaris is one of our great modern observers. It's a potent reminder that when you're as perceptive and curious as Sedaris, there's no such thing as a boring day.