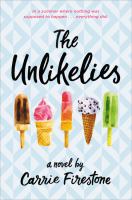 "Sadie Sullivan's pre-senior year summer changes for the better when she and four other teens band together to right local wrongs, but the Unlikelies and their heady new friendships soon face obstacles that could tear them apart"--

After 17-year-old Sadie Sullivan is brutally assaulted at a farmer's market during an altercation with a drunk man, she's left feeling shaken and isolated from her friends, despite being hailed as a hero. (The man had an infant and a shotgun in his car, and the entire "incident," as Sadie thinks of it, was captured on video and has been circulated widely, naturally.) After this jarring beginning, Firestone (The Loose Ends List) offers a mix of humor, friendship building, and altruism as Sadie and four other teens form a band of vigilante do-gooders called the Unlikelies. Together they take on injustices and perform kind acts, sometimes as small as leaving nice comments on a website, and use an unexpected windfall of illegal diamonds to fund grander projects. Firestone touches lightly on racism (Sadie is of Iranian descent on her mother's side) and dives deep into heroin addiction. It's a memorable blend of the serious, madcap, and romantic that, while over the top in some regards, champions the Unlikelies' values of kindness, bravery, and respect. Ages 14–up. Agent: Sara Crowe, Pippin Properties. (June) Copyright 2017 Publisher Weekly Annex.

Gr 9 Up—Sadie is convinced that the summer before her senior year will be boring. All her friends have graduated and are leaving their small community in the Hamptons. Sadie is stuck working at the farm stand and whiling away her evenings with her parents. An unpredictable and violent attack changes Sadie's summer—and her life—in the blink of an eye. Suddenly, she is an Internet sensation and local news darling. A "hometown hero" lunch brings Sadie together with four other teenagers, sealing their fates as a misfit band of do-gooders. They take on social media trolls and negativity, creating a team that fights for underdogs and positivity. Things get tough when they go up against a local heroin dealer in an attempt to save an addicted friend. The challenges these unlikely friends face are handled with humor, love, and authentic emotions. Firestone creates characters reflective of the teenagers who will read and fall in love with these Unlikelies. Sadie's attack will shock readers into rooting for her and her friends to rise above and beat the bad guys. The elements of romance, friendship, and family prevent the story from feeling preachy and move readers along at a comfortable pace. Fans of Maureen Johnson will appreciate the exploration of friendship and romance with a touch of humor. VERDICT A feel-good tale of friendship that's perfect for any YA collection.—Carrie Finberg, South Park High School, PA Copyright 2017 School Library Journal.

Five teens forge an unlikely alliance to secretly right wrongs throughout their community until an effort to intervene on behalf of a heroin-using friend finds them in over their heads.

Five teens forge an unlikely alliance to embark on a summer of vigilante good samaritanism throughout their community until an effort to intervene on behalf of a heroin-using friend finds them in over their heads. By the author of The Loose Ends List. Simultaneous eBook. 25,000 first printing.

"Sadie Sullivan's pre-senior year summer changes for the better when she and four other teens band together to right local wrongs, but the Unlikelies and their heady new friendships soon face obstacles that could tear them apart"--

Five teens embark on a summer of vigilante good samaritanism in a novel that's part The Breakfast Club, part The Disreputable History of Frankie Landau-Banks, and utterly captivating. Rising high school senior Sadie is bracing herself for a long, lonely, and boring summer. But things take an unexpected turn when she steps in to help rescue a baby in distress and a video of her good deed goes viral. Suddenly internet-famous, Sadie's summer changes for the better when she's introduced to other "hometown heroes." These five very different teens form an unlikely alliance to secretly right local wrongs, but when they try to help a heroin-using friend, they get in over their heads and discover that there might be truth in the saying "no good deed goes unpunished." Can Sadie and her new friends make it through the summer with their friendships--and anonymity--intact? This rich and thought-provoking novel takes on timely issues and timeless experiences with a winning combination of romance, humor, and wisdom.