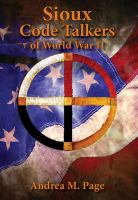 "The author's great-uncle John Bear King was a Sioux Indian in the First Cavalry in the Second World War. Her book follows seven Sioux who put aside a long history of prejudice against their people and joined the fight against Japan, using their native language as a secret code for the Americans. The Sioux and other tribal code-talking groups have historically taken a backseat to the Navajo Code Talkers, until a presidential act of recognition was signed in 2008."--Provided by pub...lisher.