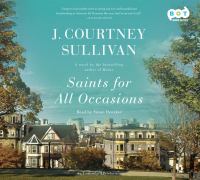 Saints for all occasions

"A sweeping novel about two sisters--one the matriarch of a boisterous Irish Catholic family, the other a cloistered nun, hidden from the world--and the secret that drove them apart"--

In her latest novel, Sullivan (The Engagements) explores the secrets of an Irish American family and how choices made by one sister as she tries to control everyone ripple out and affect many unsuspecting others. Nora Rafferty's son Patrick has died. This event brings her and her estranged sister, Theresa, a cloistered nun living in Vermont, together to confront decisions made 50 years ago. Sibling rivalry between Nora's sons John and Patrick and changing social mores are explored in extensive flashbacks. Narrator Susan Denaker brings an Irish lilt and the nasality and dropped "r's" of Boston to life. VERDICT Recommended for readers of family-centered contemporary fiction with historic recollections. Those who enjoy lighter summer fare may also enjoy this somewhat darker book. ["Sullivan (Commencement) brings her characters to life, capturing the complexities and nuances of family, tradition, and kept secrets": LJ 2/15/17 review of the Knopf hc.]—David Faucheux, Lafayette, LA Copyright 2017 Library Journal.

A NATIONAL BESTSELLER A New York Times Critics&; Top Book of 2017 "This year&;s best book about family." &;Ron Charles, The Washington PostA sweeping, unforgettable novel from The New York Times best-selling author of Maine, about the hope, sacrifice, and love between two sisters and the secret that drives them apart.Nora and Theresa Flynn are twenty-one and seventeen when they leave their small village in Ireland and journey to America. Nora is the responsible sister; she's shy and serious and engaged to a man she isn't sure that she loves. Theresa is gregarious; she is thrilled by their new life in Boston and besotted with the fashionable dresses and dance halls on Dudley Street. But when Theresa ends up pregnant, Nora is forced to come up with a plan&;a decision with repercussions they are both far too young to understand. Fifty years later, Nora is the matriarch of a big Catholic family with four grown children: John, a successful, if opportunistic, political consultant; Bridget, quietly preparing to have a baby with her girlfriend; Brian, at loose ends after a failed baseball career; and Patrick, Nora's favorite, the beautiful boy who gives her no end of heartache. Estranged from her sister, Theresa is a cloistered nun, living in an abbey in rural Vermont. Until, after decades of silence, a sudden death forces Nora and Theresa to confront the choices they made so long ago. A graceful, supremely moving novel from one of our most beloved writers, Saints for All Occasions explores the fascinating, funny, and sometimes achingly sad ways a secret at the heart of one family both breaks them and binds them together.