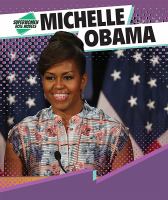 The Superwomen Role Models series might be hyping its subjects with that title, but not by much. Four very different but notable women are introduced here. Michelle Obama covers her initiatives as First Lady, including "Let's Move," and focus on veteran affairs in addition to highlighting how her parents provided her with a strong example of what it means to work hard. Brightly formatted and engaging, these books include quotes by the featured women, short but informative sidebars, and exceptionally sharp color photos. Strong introductions to strong women. Copyright 2016 Booklist Reviews.

Gr 3–4—Despite the brevity of the content, much useful context is found here, such as an outline of Ruth Bader Ginsburg's legal reasoning. Frequent "In Her Words" sidebars showcase relevant quotations, culled from published or broadcast interviews, speeches, and letters. Photos include publicity portraits and more informal snapshots, for example, Malala Yousafzai recuperating in a London hospital, though none of the other subjects are portrayed as children. The focus on Hillary Clinton's public service helps sidestep any uncertainty surrounding the fall election. However, it's difficult to see Kate Middleton's place among the other women, and the biography focuses more on her role as a princess than on her influence or achievements. A web address is provided for a curated list of online resources. VERDICT The series offers highly readable narratives about successful and prominent women, though most titles are less useful as research materials.. Copyright 2016 School Library Journal.

As the First Lady of the United States, Michelle Obama has worked to better the lives of people in America and in countries around the world. However, her inspirational story began much earlier than that, as she worked hard to graduate from Harvard Law School and become a prominent lawyer. Readers can learn a lot from Obama’s life story, which they explore through engaging main text, fact-filled sidebars, and photographs of Obama interacting with others. Direct quotes from Obama are presented in an eye-catching way, and a detailed timeline of her life summarizes her most important milestones for readers.