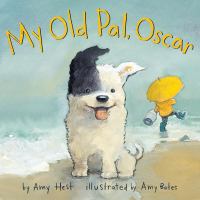 The bright-yellow end pages contrast sharply with the early images of a pup curled up under a dock on a dark, gray day. Bates' illustrations, primarily double-page spreads, focus on the relationship between a young child grieving for a dog who has died and a puppy looking for a home. The only name offered here is the boy's old dog, Oscar, and the focus is on the duo's mutual need for a friend. The pup, irresistibly drawn, shows he can dig and listen (with a perked ear), and he insistently follows his new friend, who at first resists his advances ("You know who was my pal? Oscar. My old pal, Oscar. My one and only dog"). The boy pops in a yellow raincoat, and the images gain a warmer glow as he slowly begins to accept the puppy. The tenderness of the illustrations sometimes contrasts with the heaviness of the text, but, as with Hest's Charley's First Night (2012), the warmth of the story is undeniable. Copyright 2014 Booklist Reviews.

Hest and Bates return to the themes of their 2008 collaboration, The Dog Who Belonged to No One, in a tearjerker of a story about a heartsick boy who meets a stray dog on the beach. The day is as stormy as their unnamed narrator, who stomps across the sand while a perky black-and-white dog trails him. "Hello, you. Who are you? No tags? No name?" asks the boy before brushing the dog off. Readers gradually learn that the sandy-haired child is still mourning the death of his dog, Oscar. This is a story about mutual need, a need the boy takes a while to admit or recognize, but by the time a thunderstorm chases the two indoors, it's clear the boy is ready to let this stray into his life. Bates, working in watercolor and pencil, creates wonderfully moody beachscapes dominated by gray stretches of sea and sky. While some readers may wonder whether the boy is going to attempt to find the dog's actual owner, Hest subtly captures the boy's sadness, resilience, and tenderness through his gruff, choppy narration. Ages 5–7. Illustrator's agent: Justin Rucker, Shannon Associates. (May) [Page ]. Copyright 2016 PWxyz LLC

PreS-Gr 1—A towheaded boy in a slicker roams the beach and finds himself being shadowed by a black-and-white stray puppy. The endearing canine is gently rejected despite its "soft puppy beard" and "big black eyes" because the boy still mourns his recently deceased dog, Oscar. "I'll never stop being sad," the child promises. However, a thunderstorm means the boy can't resist cradling the pup in his arm and running home to safety, where he shows the yet-to-be-named pal a picture of the title character. Bates employs watercolors irresistibly to capture both rainy beach and captivating puppy. Hest's pacing reflects the growing friendship. VERDICT The creative pair behind The Dog Who Belonged to No One now share a welcome twist on bibliotherapy following the death of a beloved pet.—Gay Lynn Van Vleck, Henrico County Library, Glen Allen, VA [Page 132]. (c) Copyright 2016 Library Journals LLC, a wholly owned subsidiary of Media Source, Inc. No redistribution permitted.

After a young boy's beloved dog dies, he is not interested in having another dog as a pet, but when he encounters a stray dog on the beach and plays with it, he begins to change his mind.

Grieving the loss of a beloved pet, a young boy tries to ignore a cuddly stray who follows him as they walk along the beach in the rain, a journey of healing during which the boy slowly opens himself up to the joys of loving a pet again. 20,000 first printing.

Review by Publisher Summary 4
After a young boy’s beloved pet passes away, he encounters an adorable stray dog on the beach. The boy tries to walk away and ignore the cuddly creature, but the puppy continues to follow him, undeterred. Though the boy is still dealing with the pain of his loss and feels afraid to care about a new pet again, as the two walk the sand together, the boy slowly opens himself up to the joy of having a new dog in his life and making peace with the past.
New York Times bestselling Amy Hest and Amy Bates, the beloved team who created The Dog Who Belonged to No One, have created a touching story about new beginnings and how friendship and love have the power to heal.