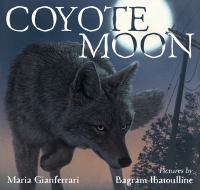 "A nonfiction picture book about coyotes hunting in suburban neighborhoods at night."--

This striking book celebrates the life of coyotes without dismissing their predatory nature. The coyote on the front cover is on the hunt, while the back cover shows an attentive young pup. Inside, Gianferrari's well-balanced text describes both the coyote's search for prey and her vulnerability: targets escape, angry geese retaliate, pups are easy prey for hawks. Although endnotes provide more information, the text and illustrations subtly provide many facts as well, showing coyotes' opportunism regarding diet and their amazing athletic abilities (in one close-up spread, the coyote almost leaps from the page in a giant pounce). Because this hunt begins at night, Ibatoulline's palette is dark. He adds mystery by including spreads full of bushes and shadows, but the coyote's eyes are always bright, popping from the dim background. Though many pages show her fierceness, there is a quiet satisfaction when the hunt is done. With sunlight and success comes a celebratory song and a child witness, warmth in text and illustrations. Copyright 2014 Booklist Reviews.

Quietly poetic text and show-stopping artwork create a tense account of a coyote's nocturnal search for food. Gianferrari (the Penny & Jelly books) instantly establishes an atmospheric setting, opening as "Coyote wakes in her den,/ a hollowed-out pine in a cemetery." Ibatoulline's paintings, always impressive, are downright astonishing in this book. He opts for a worm's-eye view in this opening scene, showing Coyote padding along as tombstones loom beside scraggly pines, moonlight filtering eerily through cloud cover. Paying near-photographic attention to the modulating light as daybreak approaches, as well as Coyote's feathery fur and the suburban neighborhood she prowls, Ibatoulline (A Little Women Christmas) follows the predator's failed attempts to secure a mouse, rabbit, and geese eggs—including a dramatic, startling "pounce!" scene—before finally capturing a turkey to feed her family. Structured like verse, Gianferrari's crisp sentences are simultaneously graceful and matter-of-fact in their observations ("Coyote threads through rusty reeds"), and a closing section of "coyote facts" goes into greater detail about how and where the canines live. Ages 4–8. Author's agent: Ammi-Joan Paquette, Erin Murphy Literary. Illustrator's agency: Gallt and Zacker Literary. (July) [Page ]. Copyright 2016 PWxyz LLC

K-Gr 2—A captivating and atmospheric title about a mother coyote on the hunt through a suburban landscape. Readers join the coyote as she leaves her pups in the den and travels through a neighborhood, a golf course, and a lakeside—all in pursuit of a mouse, a flock of geese, a rabbit, and, finally, one unfortunate turkey. The text is spare, with a focus on the coyote's movement and use of her senses: she listens to the scratching of the mouse, sniffs the air and smells the geese, lunges, slinks, pounces, and much more. With the arrival of the sun and the success of her hunt, the coyote lets out a celebratory "Yeeeep-yip-yip-yoooo" before heading back to feed and snuggle with her young. Readers looking for straightforward facts won't find them within the text; the dynamic and richly detailed illustrations are what tell the story here. Ibatoulline uses color, shadow, and dramatic angles to portray the coyote's athleticism, her hunting style, the flight response of her prey, and the passage of time (the narrative begins at night and ends with dawn). Back matter expands on the coyote's origin in the United States and its habitat, territory, diet, physical abilities, communication, and family structure. VERDICT Simple text and remarkable artwork make this a great selection for read-alouds and parent-child bonding.—Kelly Topita, Anne Arundel County Public Library, MD [Page 92]. (c) Copyright 2016 Library Journals LLC, a wholly owned subsidiary of Media Source, Inc. No redistribution permitted.

A mother coyote hunts for her family in a suburban neighborhood where she encounters a mouse, a rabbit, a flock of angry geese, and an unsuspecting turkey on the library lawn.

"A nonfiction picture book about coyotes hunting in suburban neighborhoods at night."--

A mother coyote hunts for her family in a suburban neighborhood where, on sumptuously illustrated spreads, she encounters a mouse, a rabbit, a flock of angry geese and, finally, an unsuspecting turkey on the library lawn.

A howl in the night. A watchful eye in the darkness.A flutter of movement among the trees. Coyotes.In the dark of the night, a mother coyote stalks prey to feed her hungry pups. Her hunt takes her through a suburban town, where she encounters a mouse, a rabbit, a flock of angry geese, and finally an unsuspecting turkey on the library lawn. POUNCE!Perhaps Coyote's family won't go hungry today.This title has Common Core connections.