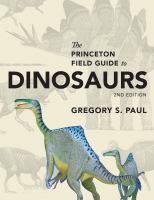 The Princeton field guide to dinosaurs

Covering 735 species of dinosaurs, this volume, the work of a well-known dinosaur researcher and illustrator, consists of two main sections. The first is an introduction that includes a discussion on dinosaur evolution, biology, behavior, and more. The majority of the information is found in the "Group and Species Accounts" section and is further divided into three groups: "Theropods," "Sauropodomorphs," and "Ornithischians." Entries on each species are concise and typically include information related to their anatomical characteristics, age, distribution, and habitat. Notes may be used to communicate alternative theories or debates that apply to the species. The volume also contains more than 600 color and black-and-white illustrations, among them more than 130 color life studies (some of them scenic views); nearly 450 skeletal, skull, head, and muscle drawings; and 8 paleo-distribution maps. Described as "the first authoritative dinosaur book in the style of a field guide," this volume is more scientific in its language and approach than many of the other dinosaur books a library will have in its collection. At the same time, the illustrations should attract dinosaur fans. Recommended for public and academic libraries. Copyright 2010 Booklist Reviews.

Paul, an eminent authority on dinosaur anatomy and a leading dinosaur illustrator, presents detailed information on all dinosaur groups. The title is misleading, since the book does not resemble a traditional field guide. Its large size provides rich content and hundreds of detailed diagrams featuring dinosaur skeletons, skulls, and artistic reconstructions. The author, well known for his detailed skeletal diagrams and ability to interpret dinosaur biomechanics, displays his formidable skills throughout this book. It begins with a 50-page sweeping introduction to dinosaur biology on such topics as dinosaur senses, digestive systems, behaviors, energetics, skin characteristics (including feathers in some), and why some dinosaurs became so large. These brief, up-to-date accounts portray dinosaurs as complex, active, and highly diverse creatures. Most of the book focuses on species-by-species accounts, beginning with theropods, followed by sauropodomorphs, and then ornithiscians. The accompanying detailed diagrams are a valuable resource. The lack of diagrams naming the actual bones of the skull and postcranial skeleton hinders understanding. Also lacking is any section devoted to naming skeletal components, an odd omission. A close reading might hold surprises for even seasoned students. Serious dinosaur scholars will devour this book; it is a major contribution to the field. Summing Up: Highly recommended. All academic and general readers. Copyright 2011 American Library Association.

This updated volume (CH, Apr'11, 48-4500) covers more than most field guides for living vertebrates and provides a rich diversity of essential information about the structure and life histories of dinosaurs. It commences with a history of dinosaur discovery and research studies about origin and extinction. A large section of the book is devoted to different dinosaur anatomies, and readers are given a textually rich account of the major groups. The author discusses basic anatomical information and specialized mechanisms, including respiration and circulation, and also explains how anatomists have used information to explore social activities and reproduction. Each section includes one or several black-and-white illustrations and a few color plates. Various systematic groups are described, and the specific fossil materials which characterize each group are noted. While the book is not a truly functional field guide, it provides the reader with a broad range of information on dinosaurs. The illustrations offer a sense of the basic structure and differences among diverse dinosaurs and how much information still needs to be learned. The loss of so much life from the world should help humans realize why conservation and preservation efforts must be increased for many of the present day animals and plants. Summing Up: Recommended. All readers.--D. Bardack, University of Illinois at ChicagoDavid BardackUniversity of Illinois at Chicago David Bardack Choice Reviews 54:09 May 2017 Copyright 2017 American Library Association.

This latest book by Paul, a leading dinosaur researcher and illustrator, is an excellent accompaniment to your standard dinosaur encyclopedias. Its strength lies is the inclusion of over 735 species, along with information on how complete the fossil skeletons representing them are, anatomical characteristics, distribution of fossil finds, the animal's probable habitat, and what scientists believe about its behavior. The text incorporates new scientific opinion on the appearance and habitat of many dinosaurs, and it is beautifully illustrated with over 600 images depicting both skeletal anatomy and current opinions on the creatures' appearance. Paul is an expert, having written seven books on dinosaurs as well as many technical papers and popular articles on the subject. VERDICT Though not a field guide to stuff in your backpack, this exciting addition to dinosaur reference is essential for high school through university libraries and is highly recommended for all students of dinosaurs.—Betty Galbraith, Washington State Univ. Libs., Pullman [Page 88]. (c) Copyright 2010. Library Journals LLC, a wholly owned subsidiary of Media Source, Inc. No redistribution permitted.

Covers nearly 750 different dinosaur species, discussing their history, biology, and the extinction of nonavian dinosaurs and providing a history of paleontology.

A fully updated and expanded new edition of the acclaimed, bestselling dinosaur field guideThe bestselling Princeton Field Guide to Dinosaurs remains the must-have book for anyone who loves dinosaurs, from amateur enthusiasts to professional paleontologists. Now extensively revised and expanded, this dazzlingly illustrated large-format edition features some 100 new dinosaur species and 200 new and updated illustrations, bringing readers up to the minute on the latest discoveries and research that are radically transforming what we know about dinosaurs and their world.Written and illustrated by acclaimed dinosaur expert Gregory Paul, this stunningly beautiful book includes detailed species accounts of all the major dinosaur groups as well as nearly 700 color and black-and-white images—skeletal drawings, "life" studies, scenic views, and other illustrations that depict the full range of dinosaurs, from small feathered creatures to whale-sized supersauropods. Paul's extensively revised introduction delves into dinosaur history and biology, the extinction of nonavian dinosaurs, the origin of birds, and the history of dinosaur paleontology, as well as giving a taste of what it might be like to travel back in time to the era when dinosaurs roamed the earth.Now extensively revised and expandedCovers nearly 750 dinosaur species, including scores of newly discovered onesProvides startling new perspectives on the famed Brontosaurus and TyrannosaurusFeatures nearly 700 color and black-and-white drawings and figures, including life studies, scenic views, and skull and muscle drawingsIncludes color paleo-distribution maps and a color time lineDescribes anatomy, physiology, locomotion, reproduction, and growth of dinosaurs, as well as the origin of birds and the extinction of nonavian dinosaurs