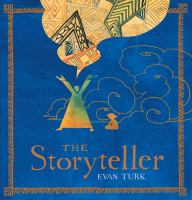 In a time of drought in the Kingdom of Morocco, a storyteller and a boy weave a tale to thwart a Djinn and his sandstorm from destroying their city.

*Starred Review* The old Moroccan saying that Turk shares with readers, "When a storyteller dies, a library burns," perfectly captures the message of his picture book: stories are life. In drought-stricken Morocco, at the edge of the Sahara desert, a thirsty child's quest for water leads him to a fountain where an old, forgotten storyteller sits. He captures the boy's imagination with a tale, and by the time the man has finished speaking, the boy's cup has miraculously filled with cool water. Day after day, the boy returns to the fountain, eager to hear more of the story. Meanwhile, a djinn draws near the parched kingdom, threatening to turn it back into desert. The boy—in a Scheherazade-like move—distracts (and defeats!) the djinn by sharing the storyteller's tales, which simultaneously rejuvenates the city by bringing its people together and replenishing the kingdom's wells. Rich illustrations rendered in watercolor, ink, and pencil engulf the pages with desert golds and deep indigo, blending folk art and contemporary styles. Double-page spreads dramatically illustrate the kingdom's forgetfulness and subsequent incursion of swirling sands, as well as the sapphirine return of water through life-giving words. Turk's layered ode to storytelling's magic begs to be shared aloud with a group, though the detailed art merits close inspection. A concluding author's note on storytelling traditions contextualizes this beautiful, original folktale. Copyright 2014 Booklist Reviews.

Swaths of indigo swirl across detailed folk art illustrations in this intricate allegorical tale about the power of storytelling. A layered narrative featuring stories nestled within stories begins with a boy in a drought-stricken Moroccan village, where water and storytellers are scarce. Looking to quench his thirst, the boy encounters an ancient raconteur: "The man's face cracked like dry mud to reveal a toothless grin. ‘Sit down, my boy, and your thirst shall be quenched.'?" Various tales and their tellers are woven into the story the old man spins, with color-coordinated typefaces and borders helping readers track the different narrators. As the boy listens, his cup fills repeatedly with water, which figures prominently in the story's climax. Turk (Grandfather Gandhi) combines primitive sketches and simple patterns to create sophisticated multimedia spreads. Fountains of blue pour from the mouths of storytellers, cementing the message that stories, like water, are life sustaining. The revelation of the final narrator brings this multifaceted tale to satisfying closure. An author's note details the inspiration for his modern-day allegory: a real-life resurgence of the storytelling craft in one Moroccan cafe. Ages 4–8. (June) [Page ]. Copyright 2016 PWxyz LLC

Gr 1–4—Folktales involving water abound in all cultures, but this tale is unusual in using water as a metaphor for story: just as we need water to nourish our physical selves, we need stories to feed our spirits. In Turk's fable, a lone storyteller remains in a Moroccan city where the water sources have all dried up. When a young boy seeks water, the water-seller has only a bowl to give him, but the storyteller tells him a tale that miraculously fills the bowl. In a series of nested stories, the boy's thirst is quenched, and by retelling the stories Scheherazade-style to a sandstorm in the form of a djinn, he is able to save the city and also replenish its water supply. In predominant hues of brown and blue, Turk's bold, semiabstract mixed-media illustrations conjure up swirls of sand and waves of water, evoking the environment and its people. The spreads contain concentric borders representing each of the stories as it is told. Using age-old literary elements and a loose, contemporary art style filled with symbolism, Turk successfully melds two equally important concerns of our time—the need to keep storytelling alive and the need to protect and conserve our drinking water. VERDICT This lush and lovely title is highly recommended for its aesthetic qualities as well as its multiple curricular tie-ins, including geography, environmental studies, language arts, and art education.—Susan Stan, Professor Emerita of English, Central Michigan University [Page 86]. (c) Copyright 2016 Library Journals LLC, a wholly owned subsidiary of Media Source, Inc. No redistribution permitted.

In a time of drought in the Kingdom of Morocco, a storyteller and a boy weave a tale to thwart a Djinn and his sandstorm from destroying their city.

From Ezra Jack Keats 2015 New Illustrator Honor recipient Evan Turk comes his debut work as author-illustrator: an original folktale that celebrates the power of stories and storytelling.Long, long ago, like a pearl around a grain of sand, the Kingdom of Morocco formed at the edge of the great, dry Sahara. It had fountains of cool, refreshing water to quench the thirst of the desert, and storytellers to bring the people together.But as the kingdom grew, the people forgot the dangers of the desert, and they forgot about the storytellers, too. All but one young boy, who came to the Great Square for a drink and found something that quenched his thirst even better: wonderful stories. As he listened to the last storyteller recount the Endless Drought, and the Glorious Blue Water Bird, he discovered the power of a tale well told.Acclaimed illustrator Evan Turk has created a stunning multidimensional story within a story that will captivate the imagination and inspire a new generation of young storytellers.