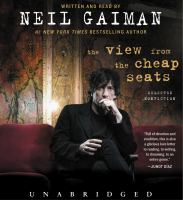 The view from the cheap seats Selected nonfiction

"The View from the Cheap Seats brings together... more than sixty pieces of his outstanding nonfiction. Analytical yet playful, erudite yet accessible, this cornucopia explores a broad range of interests and topics, including (but not limited to): authors past and present; music; storytelling; comics; bookshops; travel; fairy tales; America; inspiration; libraries; ghosts; and the title piece, at turns touching and self-deprecating, which recounts the author's experiences at the 2010 A...cademy Awards in Hollywood."--

This satisfying collection of nonfiction pieces—introductions to books by other authors, speeches, newspaper articles, interviews, paeans to some of his favorite authors and classic titles—affirms Gaiman's place as a first-class writer and narrator. Listeners familiar with his distinctive voice and cadence will be immediately immersed in this eclectic potpourri and charmed by his earnest, confiding, and heartfelt reading. The range of his interests and enthusiasms is wide reaching, and all these essays capture his passion for reading and rereading and for storytelling in all its guises—in print, audio, or film. Every listener will find favorite authors praised or classic works elucidated in Gaiman's inimitable style, thoughtful and entertaining. The writings are grouped by type, and familiar themes run through each section, making this a wonderful volume to dip into. Gaiman's companionable narration welcomes listeners to the pleasures of storytelling and offers a deeper appreciation for the artist and his art. Copyright 2019 Booklist Reviews.

Pooling together his various nonfiction works over the decades, including articles, reviews, book introductions, speeches, and more, Gaiman gives listeners a fascinating exploration into his own mind and artistic influences. Whether he's discussing classic literature, comics, film, or other works, Gaiman draws out subtle considerations that often can change how listeners think about the topic. He narrates the book effectively with his deep, slightly nasal voice and a conversational manner that will make listeners feel as he is talking to them directly. His voice reflects his own emotions—often excitement and enthusiasm—as he discusses the ideas, people, and experiences that have had a lasting impact on him. Rarely is an author as charismatic in speaking as he is in writing. A Morrow hardcover. (May) [Page ]. Copyright 2016 PWxyz LLC

The best-selling author of American Gods presents an enthralling collection of nonfiction essays on a myriad of topics—from art and artists to dreams, myths and memories—observed in his distinctive, probing and amusing style. Simultaneous.

An enthralling collection of nonfiction pieces on myriad topics—from art and artists to dreams, myths, and memories to comics, films, and literature—observed in award-winning #1 New York Times bestselling Neil Gaiman’s probing, amusing, and distinctive styleAn inquisitive observer, thoughtful commentator, and assiduous craftsman, Neil Gaiman has long been celebrated for the sharp intellect and startling imagination that informs his fiction. Now The View from the Cheap Seats brings together, for the first time ever, more than sixty works of his outstanding nonfiction on topics and people close to his heart. As Neil explains, “This book is not ‘the complete nonfiction of Neil Gaiman.’ It is, instead, a motley bunch of speeches and articles, introductions and essays. Some of them are serious and some of them are frivolous and some of them are earnest and some of them I wrote to try and make people listen.”In prose analytical yet playful, erudite yet accessible, Neil explores a broad range of interests and topics, including (but not limited to): authors past and present; music; storytelling; comics; bookshops; travel; fairy tales; America; inspiration; libraries; ghosts; and the title piece, at turns touching and self-deprecating, which recounts his experiences at the 2010 Academy Awards in Hollywood. Neil ponders the truth of fiction and the power of stories (and why we tell them), and offers his own profiles of and insights into writers who have influenced him, including C. S. Lewis, J. R. R. Tolkien, Ray Bradbury, Diana Wynne Jones, Stephen King, Rudyard Kipling, James Thurber, and his dear friend Terry Pratchett. He offers unlikely perspectives on subjects as diverse as The Bride of Frankenstein, Doctor Who, Batman, Tori Amos, Lou Reed, They Might Be Giants, and Amanda Palmer. And he includes a moving essay on the plight of Syrian refugees in a United Nations camp in Jordan.Illuminating and incisive, witty and wise, The View from the Cheap Seats explores some of the issues, subjects, and people that matter most to Neil Gaiman—and offers a unique glimpse into the mind of one of the most beloved and influential writers of our time.