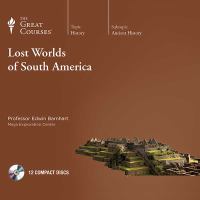 "The dramatic terrain of South America is one of the great and thrilling frontiers of archaeology. Buried by the centuries on soaring mountain slopes and beneath arid deserts and lush jungles, the remains of extraordinary, majestic civilizations-- many completely unknown until recent decades-- are now coming to light and raising tantalizing questions about what else may be awaiting discovery. These newly uncovered sites, as well as previously known ones such as Cuzco and Machu Picchu, are b...y no means those of simple, 'primitive' cultures, but show astonishing sophistication in large-scale architecture, agricultural systems, art, and urban organization, together with technological ingenuity that dazzles the imagination. As one of only six places on earth where civilization arose spontaneously, this region offers a fresh and revelatory look at how human societies formed, from the earliest organized communities to cultures of huge complexity. They paralleled, yet were absolutely different from, the ancient cultures of Greece, Egypt, and others that we know so much better. In these sites you witness, with vivid clarity, the unfolding of one of the true cradles of civilization"--From publisher's web page.