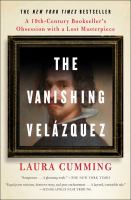 Art can change lives, but sometimes it can also destroy them. That is the case with the hapless John Snare, a nineteenth-century shopkeeper who embarked on a lifelong quest to prove the provenance of a painting he purchased at a liquidation auction and believed was the work of the great seventeenth-century Spanish painter Velázquez. As he noted in one of the three pamphlets he wrote about it, "I have looked at this portrait of King Charles I of England till my sight has become dazzled. I have thought of it till my mind has grown confused. My life has been spent trying to discover the proofs of its originality to the neglect of all other pursuits." Those pursuits included maintaining his good name and livelihood, and the quest involved courtroom drama and auction-house intrigue. Cumming (A Face to the World, 2010)writes with insight about Velázquez and his art, and her descriptions of his paintings are elegant and eloquent. Art-history aficionados will find much to admire in this story of one man's misguided pursuit of a missing portrait. Copyright 2014 Booklist Reviews.

Hapless Victorians, bizarro royal courts, and incisive art criticism all feature prominently in Cumming's (A Face to the World) lively account of a small-time bookseller who acquired a portrait of King Charles I of England and made it his lifelong mission to determine who painted it. After purchasing the painting at liquidation auction in 1845, the bookseller, John Snare, develops a complex theory that the portrait, despite being credited to a famous Flemish painter, is actually the work of Diego Velázquez, the 17th-century Spanish artist. Snare begins to publicize his theory through an exhibit at his shop and then at a hotel in Edinburgh, where the painting subsequently seized and declared stolen property. An absurd trial concerning the authorship and ownership of the painting ensues; meanwhile, the bankrupt bookseller abandons his family and flees America with his treasure in hand. Alongside the main story, Cumming describes Velázquez's life, the "spectacle" of his career as a court painter, and the remarkable evolution of his work. Cumming peppers the narrative with vivid descriptions of art, referring to the "spellbinding vision" and "compelling humanity" of Velázquez's empathetic depictions of the court dwarves, for example. Snare's story is noteworthy, but it is Cumming's spirited and clever narration that makes this enigma utterly engrossing. (Apr.) [Page ]. Copyright 2016 PWxyz LLC

Describes the true story of a provincial bookseller who discovered an incredible portrait of King Charles I at a liquidation auction and his lifelong quest to prove it was painted by Diego Velazquez.

NEW YORK TIMES BESTSELLERA Wall Street Journal Top 10 Nonfiction Book of 2016“As compelling and entertaining as a detective novel” (The Economist), the incredible true story—part art history and part mystery—of a Velázquez portrait that went missing and the obsessed nineteenth-century bookseller determined to prove he had found it.When John Snare, a nineteenth century provincial bookseller, traveled to a liquidation auction, he found a vivid portrait of King Charles I that defied any explanation. The Charles of the painting was young—too young to be king—and yet also too young to be painted by the Flemish painter to whom the piece was attributed. Snare had found something incredible—but what?His research brought him to Diego Velázquez, whose long-lost portrait of Prince Charles has eluded art experts for generations. Velázquez (1599–1660) was the official painter of the Madrid court, during the time the Spanish Empire teetered on the edge of collapse. When Prince Charles of England—a man wealthy enough to help turn Spain’s fortunes—proposed a marriage with a Spanish princess, he allowed just a few hours to sit for his portrait, and Snare believed only Velázquez could have been the artist of choice. But in making his theory public, Snare was ostracized and forced to choose, like Velázquez himself, between art and family.A thrilling investigation into the complex meaning of authenticity and the unshakable determination that drives both artists and collectors of their work, The Vanishing Velázquez is a “brilliant” (The Atlantic) tale of mystery and detection, of tragic mishaps and mistaken identities, of class, politics, snobbery, crime, and almost farcical accident that reveals how one historic masterpiece was crafted and lost, and how far one man would go to redeem it. Laura Cumming’s book is “sumptuous...A gleaming work of someone at the peak of her craft” (The New York Times).