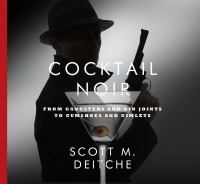 Cocktail noir From gangsters and gin joints to gumshoes and gimlets

A "look at the intertwining of alcohol and the underworld--represented by authors of crime both true and fictional and their glamorously disreputable characters, as well as by real life gangsters who built Prohibition-era empires on bootlegged booze. [The book] celebrates the potent potables they imbibed and the watering holes they frequented, including some bars that continue to provide a second home for crime writers"--Amazon.com.

Deitche's nicely written and immensely entertaining book lifts a glass to the reemergence of cocktail culture. It's also part of a curious publishing trend: books suggesting that nobody ever did anything interesting without a drink at hand. Truman had bourbon; Churchill had brandy. Deitche applies the notion to his own genre—crime fiction—and, to no one's surprise, it fits without a bit of strain. We learn the favorite tipple of Al Capone (Manhattans) and Meyer Lansky (Dewar's). Then on to the novelists. Dennis Lehane and Mickey Spillane favor beer. When Deitche gets to film—Bogie plus Bacall plus Mitchum plus Nick and Nora—we need a nap afterward. Drink recipes abound, thankfully including the most fundamental (To make a rye and water, you take rye . . . ). He finds symbolism in booze, as when Coppola uses Michael Corleone's switch from wine to champagne to say he's losing touch. And the author veers, just because he wants to, into celebrating efforts to restore disintegrating noir films. A delightful lesson in pop culture. Copyright 2014 Booklist Reviews.

Catering to lovers of the well-written word and the well-mixed drink, Cocktail Noir is a lively look at the intertwining of alcohol and the underworld?represented by authors of crime both true and fictional and their glamorously disreputable characters, as well as by real life gangsters who built Prohibition-era empires on bootlegged booze. It celebrates the potent potables they imbibed and the watering holes they frequented, including some bars that continue to provide a second home for crime writers. Highlighting the favorite drinks of Noir scribes, the book includes recipes for cocktails such as the Gimlet described in Raymond Chandler’s The Long Goodbye, the Mojito Mulatta T.J. English drank while writing Havana Nocturne and the Dirty Martini favored by mob chronicler Christian Cippolini. Cocktail Noir also lets us in on the drinking habits of notorious organized crime figures, revealing Al Capone’s taste for Templeton Rye, Meyer Lansky’s preference for Dewar’s Scotch and Gambino family hit man Charles Carneglia’s habit of guzzling Cutty Sark. With black and white illustrations throughout, Cocktail Noir is as stylish and irreverent as the drinks, often larger-than-life figures and culture it explores. Authors Quoted Extensively: Dennis Lehane Patrick Downey T.J. English Scott Burnstein Christian Cippolini Chriss Lyon Gavin Schmitt Authors Discussed: Mario Puzo Gay Talese Peter Maas Raymond Chandler Dashiel Hammet Authors Honorably Mentioned: F. Scott Fitzgerald Dorothy Parker Stephen King Truman Capote