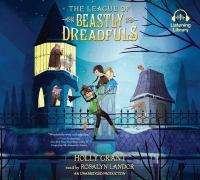 Anastasia, nearly eleven, is snatched from her elementary school and sent to live at a former insane asylum with two great aunts she had never met after being told that her parents died in a tragic vacuum cleaner accident.

*Starred Review* Anastasia McCrumpet gets quite a shock when she learns that her parents have died in a tragic vacuum-cleaner accident and, in the same day, discovers that she has two great-aunts. Anastasia goes to live with Aunties Prim and Prude in an old Victorian mansion that once served as an insane asylum. The aspiring detective's misery quickly turns to suspicion when signs that something sinister is happening in the old house become increasingly apparent. Landor narrates with perfectly measured enthusiasm, remaining engaged with the story from start to finish. With her rich sound, she creates unique and memorable character voices, which, combined with her spot-on comedic timing, make for amusing dialogue. Landor is careful to keep this dark comedy from becoming either too light or too dark at any moment, resulting in a level of tension that fascinates the listener. A character who is half man, half wolf howls many of his words, and Landor rises to this challenge with gusto. Landor crafts distinct voices for the aunties that have just the right balance of creepiness and comedy. The production includes sound effects—some of which are performed by Landor and others that sound engineered—which add to the story's spooky setting. This first in a new series should find listeners among the fans of A Series of Unfortunate Events and The Incorrigible Children of Ashton Place. Grades 4-6. Copyright 2019 Booklist Reviews.

Gr 3–6—After her parents' sudden deaths, 11-year-old Anastasia is whisked away by her two aunts, neither of whom she has ever met or even heard of. Anastasia's new home, formerly known as St. Agony's Asylum for the Criminally Insane, is large, but the girl is kept in her bedroom by her aunts, who lock her in every night. Between the mysterious, lumpy food she's given to eat and the boy with a birdcage over his head who tends the garden, Anastasia doesn't know what to think and determines that she'd better break out before she falls out of favor with her strange aunts. Narrator Rosalyn Landor expertly changes the tones of her voice for each character, adding depth to the story. Though Anastasia is upset about her parents' death, this book is not a sad one; Grant immediately moves listeners to the strange world of the aunts. VERDICT Silly dialogue and unique storytelling create a great audiobook that will rarely stay on your shelves.—Katie Llera, Bound Brook High School, NJ [Page 49]. (c) Copyright 2015 Library Journals LLC, a wholly owned subsidiary of Media Source, Inc. No redistribution permitted.

Anastasia, nearly eleven, is snatched from her elementary school and sent to live at a former insane asylum with two great-aunts she had never met after being told that her parents died in a tragic vacuum cleaner accident.

A creepy Victorian house, secretive aunties, and a great escape combine in this debut that is part Mysterious Benedict Society, part Roald Dahl, and all quirky, smart, hilarious storytelling. Join the League. . . .   Anastasia is a completely average almost-eleven-year-old. That is, UNTIL her parents die in a tragic vacuum-cleaner accident. UNTIL she’s rescued by two long-lost great-aunties. And UNTIL she’s taken to their delightful and, er, “authentic” Victorian home, St. Agony’s Asylum for the Criminally Insane.But something strange is going on at the asylum. Anastasia soon begins to suspect that her aunties are not who they say they are. So when she meets Ollie and Quentin, two mysterious brothers, the three join together to plot their great escape!"Marvelously inventive and utterly demented, THE LEAGUE OF BEASTLY DREADFULS is nasty good fun from beginning to end!" -- Bruce Coville, My Teacher is an Alien"WONDERFULLY WITTY. It reminds me of Roald Dahl's The Twits only in an insane asylum."—Chris Grabenstein,  Escape from Mr. Lemoncello's Library* “A yummy debut.”—Kirkus Reviews, starred review"Just the right mix of humor, magic, maliciousness, and suspense"—Booklist"Anastasia is anything but average, and her adventures are just beginning."—Publishers Weekly"Enough mystery and humor to keep readers wondering what will happen next. A solid debut reminiscent of Lemony Snicket's "A Series of Unfortunate Events."--School Library Journal"Abundant humor....Charmingly offbeat ...sure to entertain."--The Bulletin of the Center for Children's Books