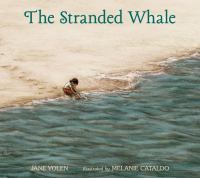 On their way home from school, Sally, Josh, and Martin discover a whale beached on the dunes and rally the town to help save the whale.

It is 1971, and a girl named Sally and her brothers are walking home across the sand dunes of their Maine town when she sees "this big gray thing, humped on the drying sand." It's a beached gray whale, which Sally attempts to help by soaking her sweater in the ocean and squeezing water over the unmoving animal. Debut artist Cataldo's grainy, ash-toned oil and pencil illustrations emphasize the physical enormity of the dying whale, as well as the children's desperation and helplessness. Though neighbors arrive with buckets and attempt to push the whale toward the receding tide, it becomes clear that their efforts are to no avail: "I was too mad to cry. Mad at the unforgiving ocean, rushing away from shore. Mad at our short arms and the whale's long body." Even after being praised by the community for her efforts, the girl refuses to relinquish her anger. It's an achingly sad story about accepting the limits of one's power, delivered with lyricism and poise. Ages 5–9. Author's agent: Elizabeth Harding, Curtis Brown. (July) [Page ]. Copyright 2015 PWxyz LLC

Gr 1–4—While walking home from school along the Maine coast, Sally and her two brothers see a beached whale. With the tide ebbing, they rush to wet down the animal's tail and fins. After Josh runs to summon help, adult volunteers and Coast Guard members arrive. Efforts to move the whale prove futile. As Sally talks to it, the animal lets out "a huge sigh like the wind off the ocean" and dies. When a Coast Guard man present medals to the children, Sally expresses the irony to herself. "So, the whale died and we were heroes." Yolen masterfully conveys both the urgency of Sally's rush to save the whale and her anger and sorrow at its death. An author's note explains her decision to set the story in 1971, when lack of cell phones would delay the arrival of both helpers and broadcasters. She also discusses possible reasons for beachings, which usually end with the whale's death. Cataldo's paintings employ the grays, steel blues, and browns of a northern coastline. Clothing colors are also muted, and daylight gives way to evening, adding to the low-key and pensive mood. VERDICT This poignant story reminds readers that despite human efforts, not all living beings can be saved and honestly portrays the frustration and sadness that can result. A thought-provoking choice.—Kathy Piehl, Minnesota State University Library, Mankato [Page 96]. (c) Copyright 2015 Library Journals LLC, a wholly owned subsidiary of Media Source, Inc. No redistribution permitted.

On their way home from school, Sally, Josh, and Martin discover a whale beached on the dunes and rally the town to help save the whale.

Tender and heartrending, Jane Yolen’s clear-eyed tale of a child’s effort to rescue a beached whale evokes a fierce love of wildlife and a universal sense of loss.Sally and her brothers are walking home from school along the dunes in their Maine town when they come upon an enormous whale. He’s stranded on the beach. Her brother runs for help, and many people rally to respond, but the tide is going out quickly and the whale is just so big. Still, Sally is able to sit near the whale’s massive eye and tell him he’s beautiful and strong, and that she will miss him no matter what happens. Master storyteller Jane Yolen and illustrator Melanie Cataldo have created an authentic portrait of vulnerability that is at once spare, moving, and honest.