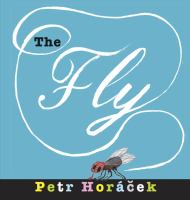 A housefly introduces himself and talks about his day, and how he spends his time flying laps around a lamp to keep fit, avoiding being eaten by animals, and dodging flyswatters.

Readers get to be a fly on the wall—and the ceiling and the breakfast table—alongside a six-legged narrator who spends much of Horacek's story trying to avoid a bright blue flyswatter that lands with a loud "FLAP." The housefly can't understand what all the fuss is about: "Look at him down there. He's after me already and it's only breakfast time," it complains in an inverted scene that shows a redheaded, flyswatter-wielding boy sitting upside-down in a kitchen. Horacek (The Mouse Who Ate the Moon) has great fun spoofing fly behavior ("After breakfast, I do my exercises—156 times around the lamp keeps me fit") and playing up the insect's unawareness of its pest status ("Once a frog nearly ate me, then a bird nearly caught me. Both in the same day. Why?"). Lush mixed-media artwork makes cupcakes and cookies look tempting to humans and flies alike, and while the world is stacked against the fly, after it lands on the boy's forehead, a die-cut flyswatter lets readers help whack the kid in the face with it—a small victory for a small hero. Ages 3–7. (May) [Page ]. Copyright 2014 PWxyz LLC

PreS-Gr 2—Poor Fly just can't catch a break. Even though he's just a normal housefly, people don't like him in the house. No matter where he goes or what he does, everyone wants to swat him. "Flap!" Through humorous text ("After breakfast, I do my exercises—156 times around the lamp keeps me fit!") and bright mixed-media illustrations, including several pages that cleverly serve as a flip-the-flap fly swatter, this will be a sure hit with the preschool crowd. Pair this with Lydia Monks's Aaaarrgghh! Spider! (HMH, 2004) for a fun-filled storytime about sympathetic creepy crawlies. VERDICT A great companion title for fans of Tedd Arnold's "Fly Guy" books (Scholastic).—Jessica Marie, Salem Public Library, OR [Page 84]. (c) Copyright 2015 Library Journals LLC, a wholly owned subsidiary of Media Source, Inc. No redistribution permitted.

A housefly introduces himself and talks about his day, and how he spends his time flying laps around a lamp to keep fit, avoiding being eaten by animals, and dodging flyswatters.

A look into the life of a fly who does not quite understand why no one likes him.

There's never a dull moment in this funny, beautifully illustrated tale depicting a pesky fly in a whole new light.The housefly in this story doesn't understand why people won't share their food with him or play with him . . . and why do they keep trying to give him a swat? He's not doing any harm! In a clever, interactive novelty book buzzing with fun, Petr Horácek may make readers reluctant to turn the final page.