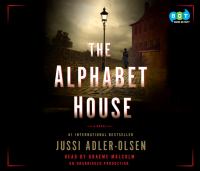 The alphabet house A novel

British pilots James Teasdale and Bryan Young have been chosen to conduct a special photo-reconnaissance mission near Dresden, Germany. Intelligence believes the Nazis are building new factories that could turn the tide of the war. When their plane is shot down, James and Bryan know they will be executed if captured. With an enemy patrol in pursuit, they manage to jump aboard a train reserved for senior SS soldiers wounded on the eastern front.

Two British pilots, friends since childhood, are shot down during a photo-reconnaissance mission over Dresden, Germany, during WWII. They escape by posing as injured German soldiers, but at the infamous Alphabet House, a hospital near Freiburg, they (and other officers) are subjected to experimental drug and electroshock therapies. Can they survive these atrocities and possibly escape? In a menacing baritone, Malcolm establishes the tone of this gritty, violent story from the beginning and never relents. The many German characters speak with appropriate accents and inflections, and Malcolm correctly pronounces the myriad German words. Unfortunately, he reads this nightmare story at a brisk pace that emphasizes the unrelenting tension but downplays nuances in character and the intricacies of the plot. Still, listeners will relish the opportunity to experience Adler-Olsen's early work, and fans of his hard-edged Department Q mystery series will appreciate the unsettling tone and the hints of his later style. Copyright 2019 Booklist Reviews.

This stand-alone psychological thriller written in 1997, Adler-Olsen's debut novel, is set in different times and places—Germany during World War II and England in the 1970s. In the first part of the novel, downed British pilots James Teasdale and Bryan Young pose as SS officers and end up in a horrific mental institution. The second half of the book is set in 1972 and reunites James and Bryan with several other characters from decades earlier, making for physically and psychologically intense scenes. Narrator Graeme Malcolm is, as usual, superb. VERDICT This audiobook demonstrates the wit and satirical view prevalent in Adler-Olsen's "Department Q" series. Fans of Alan Furst, Philip Kerr, Joseph Kanon, and Martin Cruz Smith will enjoy it. ["Extensive details weigh down the first half of the book. Furthermore, Adler-Olsen did not introduce enough interaction between Bryan and James at the beginning of the book to convince readers of the special friendship upon which he bases his entire story": LJ 12/14 review of the Dutton hc.]—Sandra C. Clariday, Tennessee Wesleyan Coll. Lib., Athens [Page 58]. (c) Copyright 2014. Library Journals LLC, a wholly owned subsidiary of Media Source, Inc. No redistribution permitted.

Conducting a special photo-reconnaissance mission in World War II Dresden, two British pilots are shot down and try to escape on an SS senior soldier train only to land in a mental hospital where patients are subjected to experimental therapies.

In the tradition of Alan Furst, the #1 international bestselling author delivers his first stand-alone novel, a psychological thriller set in World War II Nazi Germany and 1970s England British pilots James Teasdale and Bryan Young have been chosen to conduct a special photo-reconnaissance mission near Dresden, Germany. Intelligence believes the Nazis are building new factories that could turn the tide of the war. When their plane is shot down, James and Bryan know they will be executed if captured. With an enemy patrol in pursuit, they manage to jump aboard a train reserved for senior SS soldiers wounded on the eastern front.In a moment of desperation, they throw two patients off the train and take their places, hoping they can escape later. But their act is too convincing and they end up in the Alphabet House, a mental hospital located far behind enemy lines, where German doctors subject their patients to daily rounds of shock treatments and experimental drugs. The pilots’ only hope of survival is to fake insanity until the war ends, but their friendship and courage are put to the ultimate test when James and Bryan realize they aren’t the only ones in the Alphabet House feigning madness.Millions of fans around the world—and in this country—know Adler-Olsen for his award-winning Department Q series. His first stand-alone, The Alphabet House, is the perfect introduction for those who have yet to discover his riveting work.