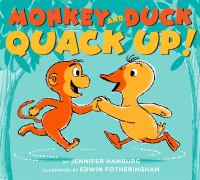 Monkey and Duck quack up!

Monkey and Duck enter a rhyming contest but there is one problem--Duck can not rhyme and all he says is "quack."

Here are two friends who could not be more different. Motormouth Monkey raps incessantly, bouncing about to the beat of his rhymes, while laid-back Duck utters only one word—"Quack." Monkey decides they should enter a rhyming contest where the prize is a three-day cruise. Predictably, things don't go well, mostly because Monkey fails to notice that his lines must end with the ack sound if he wants Duck to participate. Finally Monkey realizes his mistake and develops a winning rhyme for the two. Much of the story's humor is conveyed through Fotheringham's clever illustrations. Monkey's constant movement is recorded in a series of dots across the page, while his growing frustration with Duck is signaled through facial expressions. By contrast, placid Duck remains smiling and unperturbed throughout. The cruise spreads reinforce these entrenched personalities—until a final surprise frame of Duck. Younger listeners will enjoy completing Monkey's unfinished verses within the story, and slightly older children will be spurred to create their own lists of rhyming words. Copyright 2014 Booklist Reviews.

With a three-day cruise on the line as a prize, Monkey drafts his friend Duck to participate in a rhyming contest. Two more challenges quickly emerge: phlegmatic Duck is the exact opposite of hyperactive Monkey, and all Duck wants to say is "Quack." It's a recipe for last place, unless Monkey can turn Duck's deficits into a winning ticket. Although little more than an extended sketch, the story has its rewards. Fotheringham's (A Home for Mr. Emerson) bright, bold artwork has intriguing textures and reinforces the characters' Odd Couple personalities. Hamburg (A Moose That Says Moo) gives the story serious read-aloud potential as she combines the repetition of "Quack" with Monkey's struggle to stay calm ("Okay. Look, Duck./ Clearly you're a wee bit stuck./ Stand up straight and lace your shoes./ We MUST be on that three-day cruise!"). The final joke (spoiler alert: Duck's vocabulary is more extensive than he lets on) is tailor-made for a womp-womp-womp "sad trombone" sound effect. Ages 4–8. Author's agent: Jennifer DeChiara, Jennifer DeChiara Literary Agency. Illustrator's agent: Pat Hackett. (Feb.) [Page ]. Copyright 2014 PWxyz LLC

PreS-Gr 2—When Monkey spies a sign advertising a two-person rhyming contest, he is certain that he and his pal Duck can easily win the grand prize of a three-day cruise. "We can do this, we can rhyme!/We're young, we're hip, we're in our prime." Unfortunately, Monkey's desire to find rhyming words jointly is squelched by Duck's inability to respond with anything but "Quack!" Monkey offers up "Beat, Sheet, Meet, Greet…Wash your feet…Trick or treat." "Quack" is Duck's only response. When a frustrated Monkey is about to give up, then inspiration strikes. They enter the contest, and Monkey recites words that rhyme with quack: "Rack, Sack, Plaque, Track!" and so on. After winning the contest, they have a great time on their cruise. True to their personality differences, Duck relaxes and Monkey tries every activity offered. The pleasing, digitally rendered illustrations are presented in bold yellow and orange, on backgrounds of green, blue, and purple. The text rhymes, of course, although at times it is a bit forced and singsong. The surprise ending lifts this tale a bit, but the book will serve best as an additional purchase.—Roxanne Burg, Orange County Public Library, CA [Page 102]. (c) Copyright 2014. Library Journals LLC, a wholly owned subsidiary of Media Source, Inc. No redistribution permitted.

Monkey and Duck enter a rhyming contest but there is one problem--Duck can not rhyme and all he says is "quack."

Monkey and Duck enter a rhyming contest but there is one problem--Duck cannot rhyme and all he says is "quack."

Combines whimsical illustrations and rollicking rhymes in the story of best friends Duck and Monkey, who team up in a riotous rhyming competition in spite of their differences. By the Emmy Award-winning author of A Moose That Says Moo.

Colorful comedy, rollicking rhyme, charismatic characters, and a funny friendship -- this winning picture book has got it all!Duck and Monkey,best of friends,as different as odds and ends. Monkey's eager, Duck's laid-back.Together do they have the knackto be a winning rhyming teamand satisfy a monkey's dream?Turn the page and try your luck.See if you can out-rhyme Duck!