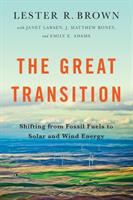 Amid all the doom, gloom, and denial, here comes a book that promises some good news regarding viable energy resources in the age of climate change. Groundbreaking environmentalist and founder of the Earth Policy Institute, Brown extols the virtues and possibilities of wind and solar power, and supports his advocacy with hard facts, concrete examples, and surprising statistics. The conversion from fossil fuels and nuclear power to renewable and inexhaustible energy sources has already begun. In the U.S., states such as Iowa and South Dakota are procuring large amounts of electricity from wind farms, while others, such as Massachusetts, have a firm deadline for going off-grid. Such a transition from one source of power to another is not without precedent; after all, it was only 150 years ago that the first oil well was drilled. By carefully analyzing policies and practices already in place around the world, Brown and his team of researchers demonstrate that new energy sources will be commonplace sooner than we think. Copyright 2014 Booklist Reviews.

Brown, esteemed global environmental issues analyst and author of 51 books, is retiring, and his Earth Policy Institute is soon to be shuttered. As his swan song, it is hard not to see in this book some quiet satisfaction in the changes Brown foresees as the shift to renewables advances. That move, he claims, is just starting and will accelerate as the costs of clean technologies fall, such that "we are looking at the prospect of a half-century's worth of change within the next decade." A chapter each is devoted to old energy sources (oil, coal, nuclear) and the reasons why they're on the way out (finite, dirty, expensive). Wind, solar, geothermal, and hydropower are discussed in terms of global adoption rates, key technological features, and likely future trends. Social attitudes toward renewables are scarcely noted. This short book reads long: the cumulative effect of paragraph after paragraph of figures (world and national rankings, monetary values, megawattage, etc.) can be stupefying—an infographic or two might have provided some relief. VERDICT Despite its density, this is a reliable discussion starter on the changing world energy economy.—Robert Eagan, Windsor P.L., Ont. [Page 101]. (c) Copyright 2014. Library Journals LLC, a wholly owned subsidiary of Media Source, Inc. No redistribution permitted.

Examines the rise of a new global energy economy moving away from coal and oil, and toward solar and wind power, as costs for those technologies continue to drop.

As oil insecurity deepens, the extraction risks of fossil fuels rise, and concerns about climate instability cast a shadow over the future of coal, a new world energy economy is emerging. The old economy, fueled by oil, natural gas, and coal is being replaced with one powered by wind, solar, and geothermal energy.The Great Transition details the accelerating pace of this global energy revolution. As many countries become less enamored with coal and nuclear power, they are embracing an array of clean, renewable energies. Whereas solar energy projects were once small-scale, largely designed for residential use, energy investors are now building utility-scale solar projects. Strides are being made: some of the huge wind farm complexes under construction in China will each produce as much electricity as several nuclear power plants, and an electrified transport system supplemented by the use of bicycles could reshape the way we think about mobility.

The great energy transition from fossil fuels to renewable sources of energy is under way.