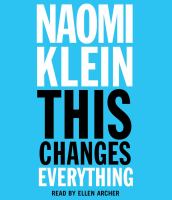 This changes everything [capitalism vs. the climate]

Despite mounting scientific evidence, climate change denial is surging in many wealthy countries, and fossil-fuel extraction has gathered pace. Naomi Klein exposes the work of ideologues who know the difficulties this poses to the free market, and challenges the failing strategies of environmental groups.

From big-picture issues, such as the alarmingly small window of time for the world to reverse its mindless consumption of finite resources, to specific issues, such as the ghastly, big-carbon-footprint process of extracting crude oil from the Alberta Tar Sands, this is a book whose message—as uncomfortable, even unwelcome, as it is to hear—derives from a sense of extreme urgency. That urgency probably would have been more authentically conveyed by the author herself than by the more actorly narrator, Archer. It seems contradictory that Klein, who so eloquently voiced opposition to the economic predations of globalization and corporate greed in her best-selling The Shock Doctrine, should give that voice over to another narrator in this wake-up call to the environmental predations of those same forces. As such, Archer gives a well-articulated but slightly distanced reading, distracting only when she changes voice to reflect a different speaker. Still, Klein's message comes through loud and clear: time is running out on our ability to save the earth from ourselves. Copyright 2019 Booklist Reviews.

Klein (The Shock Doctrine) here presents a timely summary of the alarming state of the world's climate and her no-nonsense view of the drastic, challenging work that must be done before life on Earth is threatened. Klein reminds listeners that the time for less-extreme measures has long passed. As she explains, the impact of capitalism, human greed, and selfishness, and the ever-increasing addiction to profit and growth continue to dig humanity deeper and deeper into possible climatological oblivion. She is adamant that what will save the world is a radical transformation of the current economic system and the application of entrepreneurial enthusiasm to break the worldwide dependence on carbon sources of energy. She also explains how a new process of rebuilding and reinventing the collective, the communal, the commons, and the civil might, after many decades of attack and neglect, begin a new era of natural worldwide climate cycles that would no longer be caused by human folly. Ellen Archer's steady, solid reading helps connect listeners with this densely packed work. VERDICT This important contribution to the rapidly growing climate change genre is highly recommended for all collections.—Dale Farris, Groves, TX [Page 48]. (c) Copyright 2014. Library Journals LLC, a wholly owned subsidiary of Media Source, Inc. No redistribution permitted.

The most important book yet from the author of the international bestseller The Shock Doctrine, a brilliant explanation of why the climate crisis challenges us to abandon the core “free market” ideology of our time, restructure the global economy, and remake our political systems.In short, either we embrace radical change ourselves or radical changes will be visited upon our physical world. The status quo is no longer an option.In This Changes Everything Naomi Klein argues that climate change isn’t just another issue to be neatly filed between taxes and health care. It’s an alarm that calls us to fix an economic system that is already failing us in many ways. Klein meticulously builds the case for how massively reducing our greenhouse emissions is our best chance to simultaneously reduce gaping inequalities, re-imagine our broken democracies, and rebuild our gutted local economies. She exposes the ideological desperation of the climate-change deniers, the messianic delusions of the would-be geoengineers, and the tragic defeatism of too many mainstream green initiatives. And she demonstrates precisely why the market has not—and cannot—fix the climate crisis but will instead make things worse, with ever more extreme and ecologically damaging extraction methods, accompanied by rampant disaster capitalism.Klein argues that the changes to our relationship with nature and one another that are required to respond to the climate crisis humanely should not be viewed as grim penance, but rather as a kind of gift—a catalyst to transform broken economic and cultural priorities and to heal long-festering historical wounds. And she documents the inspiring movements that have already begun this process: communities that are not just refusing to be sites of further fossil fuel extraction but are building the next, regeneration-based economies right now.Can we pull off these changes in time? Nothing is certain. Nothing except that climate change changes everything. And for a very brief time, the nature of that change is still up to us.