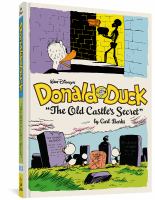 In this collection of stories, originally published during the 1950s, follow the epic adventures of Donald Duck and his nephews, Huey, Louie, and Dewey. Facing a financial crisis, Uncle Scrooge recruits his nephews for a trip to the McDuck clan's ancient castle to locate a lost treasure-- guarded by a jealous ghost!

The applause-worthy effort to publish the entirety of Barks' duck oeuvre continues in this third book, which covers his 1948 output and, when all is said and done, will be the sixth volume, chronologically speaking. The two longer anchor stories are "The Old Castle's Secret," a terrific ghost mystery set in an old Scottish castle, and "The Sheriff of Bullet Valley," which sends Donald on a Wild West caper of cattle rustlin' and outlaw bustin'. Oodles of shorter pieces provide more evidence yet that this series is an essential addition to any serious (or just plain fun) comics collection. Copyright 2013 Booklist Reviews.

Gr 3 Up—In the history of comics it is rare to find a creator so devoted to and so invested in his characters as Barks. In 24 years of writing and illustrating Donald Duck comics (1942–1966), he produced more than 500 stories on more than 6000 pages. "The Old Castle's Secret" is the third in a multivolume series celebrating Barks's prolific and popular run with the Disney character. Aside from the titular story, this volume contains 19 more, ranging in length from one to 30 pages. The plots are similar-Donald's big mouth gets him into trouble and his three nephews bail him out-but the formula never gets tired. The subtle characterizations take center stage, teaching readers more about the characters with each new adventure. Barks's artwork serves the stories well, and he was ahead of his time in his ability to portray movement using the comics format (he started as an animator) and emotion despite the limitations of duck anatomy. In addition to the comics themselves, the volume contains commentary for all of the stories from a variety of experts and a biography of Barks at the end. Fantagraphics gets high marks for presentation as well, with the attractive cover art sporting a smooth-to-the-touch surface and glossy lettering. At least one book from this set should be considered essential to every comics collection, and more as budgets allow.—J. M. Poole, Webster Public Library, NY [Page 167]. (c) Copyright 2013. Library Journals LLC, a wholly owned subsidiary of Media Source, Inc. No redistribution permitted.

Facing a financial crisis, Uncle Scrooge recruits Donald, Huey, Dewey, and Louis for a trip to the McDuck clan's ancient castle to locate the lost family treasure, guarded by a jealous ghost who is willing to kill to keep it.

In this collection of stories, originally published during the 1950s, follow the epic adventures of Donald Duck and his nephews, Huey, Louie, and Dewey. Facing a financial crisis, Uncle Scrooge recruits his nephews for a trip to the McDuck clan's ancient castle to locate a lost treasure-- guarded by a jealous ghost!

Donald and his nephews face high-tech Wild West villainy and much more in this new collection, which includes “extras” such as “In Darkest Africa,” unreleased for decades.

With this volume, “The Complete Carl Barks Disney Library” loops back to Barks’s earlier days, collecting the entirety of Barks’s (astounding) 1948 output. The title story, “The Old Castle’s Secret,” is notable not just for being the first full-length 32-page adventure instigated by Scrooge McDuck (in his second-ever appearance), but for featuring some of Barks’s spookiest, lushest settings in old Clan McDuck castle of Dismal Downs. The other long story, “The Sheriff of Bullet Valley,” plunks Donald and the nephews in the Wild West, with Donald as an overconfident deputy having to deal with some high-tech rustlers. The book also includes the less-known “In Darkest Africa,” originally published in a giveaway and unreleased for decades. This volume also features an even 10 of Barks’s dynamic “Walt Disney’s Comics and Stories” 10-pagers, including “Wintertime Wager” (the first appearance of a not-yet-lucky-but-still-obnoxious Gladstone Gander); “Spoil the Rod” (in which the exquisitely named educational professor Pulpheart Clabberhead is brought in to help tame the nephews); “Rocket Race to the Moon” (a rare full-on adventure—interplanetary, no less—in the short form); “Gladstone Returns” and “Links Highjinks” (two more Gladstone yarns); and five more stories... plus a half-dozen hilarious one-page gags. Of course, once again all the stories have been shot from crisp originals, then re-colored (and printed) to match, for the first time since their original release over 60 years ago, the colorful yet soft hues of the originals—and of course the book is rounded off with essays about Barks, the Ducks, and these specific stories by Barks experts from all over the world.