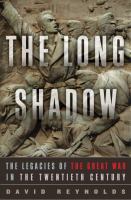 One of the most violent conflicts in the history of civilization, World War I has been strangely forgotten in American culture. It has become a ghostly war fought in a haze of memory, often seen merely as a distant preamble to World War II. In The Long Shadow critically acclaimed historian David Reynolds seeks to broaden our vision by assessing the impact of the Great War across the twentieth century.

The ramifications of WWI, profound and persisting to this centennial year of its outbreak, have been so contested that it takes an accessible, perceptive historian like Reynolds to interpret them fairly. To simplify the task, he divides WWI's effects into two periods, the 1920s–30s, when political and economic consequences were pressing postwar imperatives to victors and vanquished, and the time since WWII, whose even greater destructiveness compelled reconceptualization of the meaning of the war now rebranded as the First World War. Reynolds alights upon the major combatants of WWI, with special emphasis on Britain. Keen to test the validity of the popular impression of the war as futile slaughter, Reynolds examines popular attitudes at the time as expressed in reactions to newsreels and, later, in the 1920s, to literature and war memorials. Public sentiment cannot, in Reynold's presentation, be called antiwar. Such a view became widespread mainly through television productions, documentaries, and historical studies made since the 1960s. Concluding with his analysis of that cultural output, Reynolds demonstrates with authoritative acuity how malleable an object the history of 1914–18 has been. Copyright 2014 Booklist Reviews.

The subtitle of this work indicates its ambitious nature, as any evaluation of WW I's legacies must somehow balance a broad perspective with selectivity. Reynolds (Cambridge) has succeeded ably here in a work of surprising brevity, given the task undertaken. Writing from a professedly Anglocentric perspective, Reynolds devotes part one of the book to "Legacies"--chiefly, the consequences of the Great War evident in the interwar era (or postwar era, as he notes contemporaries viewed it), with attention to the major Western powers and the empires of the USSR and Japan. The second part focuses on post-1945 perspectives on and interpretations of the meaning of the 1914-18 conflict, especially in light of the subsequent world war. The chapters titled "Evil" and "Remembrance" are especially worthwhile. Reynolds's contention that Britain's Great War experience (and, to a lesser extent, that of the US) was unique is thought provoking and well supported. Well written and offering numerous insights. Summing Up: Highly recommended. All levels/libraries. General Readers; Lower-division Undergraduates; Upper-division Undergraduates; Graduate Students; Researchers/Faculty; Two-year Technical Program Students; Professionals/Practitioners. B. T. Browne emeritus, Broward College Copyright 2014 American Library Association.

Wolfson Prize winner Reynolds shows not only how World War I shaped the 20th century but how key events like World War II and the Cold War shaped our attitudes about that war. [Page 69]. (c) Copyright 2013. Library Journals LLC, a wholly owned subsidiary of Media Source, Inc. No redistribution permitted.

Reynolds (international history, Cambridge Univ.; From Munich to Pearl Harbor) presents a British-centered and encompassing look at World War I and its global impact. Alternating between economic, historiographical, political, cultural, revolutionary, and literary motifs, this work (winner of the 2014 PEN Hessell-Tiltman Prize) reasserts and clarifies the influence the years from 1914 to 1918 had on the modern world. Reynolds deftly blends a variety of thematic approaches and viewpoints, drawing together resources and documents from across the globe to present a picture of a world impacted by and reacting to this massively altering event. The author's use of Britain as the focus for his discussions is slightly overwhelming in the earlier sections for someone not well versed in British politics of the early 1900s and 1920s, but it ultimately provides a connecting thread for the book. Intriguing and well written, each of the chapters could easily form a stand-alone work. VERDICT Especially relevant on the eve of the 100th anniversary of World War I, this title collects decades of research, literature, film, and understanding to provide a reasoned, compelling take on a conflict that changed the face of the world. It will be appreciated by armchair historians and academics alike. [See Prepub Alert 11/3/13; for more nonfiction reviews on World War I, see "The Great War" roundup, LJ 4/15/14 or go to ow.ly/waeq8.]—Elizabeth Zeitz, Otterbein Univ. Lib., Westerville, OH [Page 91]. (c) Copyright 2014. Library Journals LLC, a wholly owned subsidiary of Media Source, Inc. No redistribution permitted.

Reynolds, Cambridge University historian and Wolfson Prize winner for In Command of History, proposes "to shift our view of the Great War out of the trenches" and establish the 1920s and '30s as postwar years, rather than an interwar preliminary to a greater conflict. The war "undermined civilization itself"; nevertheless Europe "was not frozen in perpetual mourning." In the postwar years liberal democracy appeared politically triumphant, but the question remained whether still-endemic violence could be sufficiently contained to avert another great war. Reynolds also presents the process of "refracting" the Great War in the context of WWII, which "finished the job apparently botched in 1918." WWII manifested evil in ways that "sanctified by morality": a sharp contrast to the Great War's "equivocal ending and moral ambiguity." Two strong chapters present the Great War's post-1945 transition from "communicative to cultural memory," and the focusing of remembrance on the experiences of individual soldiers. Reynolds's analysis provocatively contextualizes the interwar British experience, presenting a Britain "more stable than its continental neighbors," which facilitated a "constricted... view of the Great War" as a "unique... project of remembrance" and nurtured a continuing sense of exceptionalism even as its material bases eroded. Color illus. Agent: Peter Robinson; Rogers, Coleridge & White (U.K.). (May) [Page ]. Copyright 2014 PWxyz LLC

A critically acclaimed historian describes the first World War in terms of its lasting impact on politics, diplomacy and economics as well as art and literature across the 20th century and not just as a precursor to World War II. 20,000 first printing.

A critically acclaimed historian describes the first World War in terms of its lasting impact on politics, diplomacy, and economics as well as art and literature across the twentieth century and not just as a precursor to World War II.

This study charts how UK attitudes on WWI changed over the 20th century. In addition to analyzing the political impact of the war in a European context, the book describes representations of the war in art, music, and poetry. Chapters range across a variety of historical subdisciplines, from military history to cultural studies and economics. Part 1 explores the impact of WWI on the 1920s and 1930s, before perspectives on the Great War were transformed by the onset of WII. Part 2 covers the WWII period and after. The study is detailed enough for scholars yet accessible to general readers and history buffs, with the narrative written in plain language. The book includes b&w and color historical photos, illustrations, paintings, and posters. Annotation ©2014 Ringgold, Inc., Portland, OR (protoview.com)

A magisterial reinterpretation of the place of the Great War in modern history.