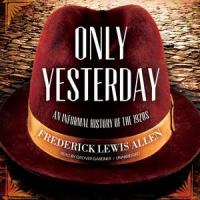 Only yesterday [an informal history of the 1920's]

Jazz, flappers, flasks, rumbleseats, and raccoon coats; Mah Jong, crossword puzzles, marathon dancers, and flagpole sitters; Red Grange, Rudolph Valentino, and Lucky Lindy. These were the catch words of the roaring, irrepressible '20's. But so were the Boston Police Strike, the K.K.K., women's suffrage, Sigmund Freud, Sacco and Vanzetti, Teapot Dome, Black Tuesday. In this span between armistice and depression, Americans were kicking up their heels, but they were also bringing abo...ut major changes in the social and political structure of their country. Only Yesterday is a penetrating biography of this restless decade--a reminiscence for those who can remember, a firsthand look for those who've only heard.