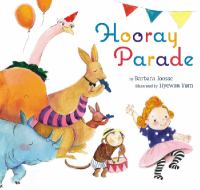 "Using the window as her stage, Gramma uses the things in her basket to create a wonderful parade of shadow animals."--

Joosse (Lovabye Dragon) celebrates imagination and a grandmother's creativity in this carefree story loosely based on her children's song, "Hip Hooray Parade." Framed as a guessing game, the book has a sense of playfulness that derives from freewheeling verse, rhyme and repetition, and nonsense words. Much to the delight of her granddaughter, the contents of Gramma's basket are gradually revealed when she hangs up a sheet and uses props to create shadows that hint at the identity of various animals ("Gallump gallump./ Can you guess what's coming up?"). A page flip shows the entire animal in full color and high spirits: an elephant with "a pink and purple stripy trunk" balances on a ball; rhinoceri tethered to orange balloons float in the air; and a kangaroo and her joey are "a-rooting and a-tooting" their blue kazoos. Yum (Mom, It's My First Day of Kindergarten!) uses watercolors and linoleum block prints to create spare yet festive illustrations, which pop from the white backdrop. A jubilant parade led by Gramma and granddaughter caps off this rousing and affectionate romp. Ages 3–5. Illustrator's agent: Sean McCarthy, Sheldon Fogelman Agency. (June) [Page ]. Copyright 2013 PWxyz LLC

PreS—When Gramma comes to visit, she charms her granddaughter with her shadow-puppet guessing game. Imagination allows Elephant, Ostrich, Rhino, and Monkey to escape the curtain and join the humans for the final page's Hooray Parade. Joosse's rollicking rhythms and repetition, "snorting out red confetti, ready ready red confetti," keep the energy up. Yum uses watercolors and linoleum block prints in her cavorting cartoons. The spunky granddaughter has curly red hair, a pink flounced skirt, and striped tights. Animals are attired in everything from a black tie to party hats to jeweled rings. This cheery romp will require slow reading of its tongue-twisting text, but this mood lifter is worth it.—Gay Lynn Van Vleck, Henrico County Library, Glen Allen, VA [Page 78]. (c) Copyright 2013. Library Journals LLC, a wholly owned subsidiary of Media Source, Inc. No redistribution permitted.

"Using the window as her stage, Gramma uses the things in her basket to create a wonderful parade of shadow animals."--

Using the window as her stage, Gramma uses the things in her basket to create a wonderful parade of shadow animals.

Using the window as her stage, Gramma uses the things in her basket to create a wonderful parade of shadow animals. From the author of Mama, Do You Love Me? and the illustrator of Mom, It's My First Day of Kindergarten!