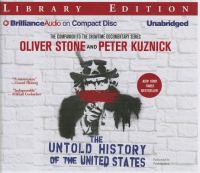 The untold history of the United States

At last the world knows America as the savior of the world. Woodrow Wilson, the notion of American exceptionalism, dating back to John Winthrop's 1630 sermon aboard the Arbella, still warps Americans understanding of their nation's role in the world. Most are loathe to admitting that the United States has any imperial pretensions. History tells a different story as filmmaker Oliver Stone and historian Peter Kuznick reveal in this riveting account of the rise and decline of the American... empire.

Stone and Kuznick offer a politically Left-leaning alternative view of American history, from WWI to Obama's first term, tackling the dark side of American foreign policy. The audio is a companion to Stone's 10-part Showtime series, which offers up a provocative American-history account—which, though spun out of the fringe machinations of Stone's mind, is packed with interesting details, theories, and much food for thought. Berkrot's narration is in a style now common to polarized political nonfiction: namely, the slightly sarcastic tone that holds the listener in suspense for the formulated truth just waiting to be revealed. At more than 30 hours long, The Untold History of the United States presents a challenge to any narrator to keep the ear of his or her audience, but with steady pacing and clear enunciation, Berkrot has met and even exceeded that challenge. Recommended for fans of Stone's revisionist history and anyone interested in twentieth-century American history. Copyright 2019 Booklist Reviews.

Filmmaker Stone and historian Kuznick provide a companion to their recent Showtime documentary series that shatters popular notions about America's role as a world superpower during the past century. Peter Berkrot provides biting narration that matches the tone of the book. As unapologetic progressives, Stone and Kuznick approach the past century with predictable disdain for political leaders from the right, but also with a tone of wounded betrayal regarding figures from the establishment left who have embraced Cold War and imperialistic policies. Among the highlights of Berkrot's performance is his chilling rendering of auto tycoon Henry Ford's pro-German declarations in the years leading up to Word War II. The narrator also demonstrates a rather impressive ability to mimic the voices of American presidents, most notably Nixon, Johnson, and Truman. Granted, Berkrot's approach to such characterizations doesn't capture subtle nuances, but neither do the authors themselves. A Gallery paperback. (June) [Page ]. Copyright 2013 PWxyz LLC

A companion to the ten-part documentary series outlines provocative arguments against official American historical records to reveal the origins of conservatism and the obstacles to progressive change.

&;Indispensable&; There is much here to reflect upon.&; &;President Mikhail Gorbachev&;As riveting, eye-opening, and thought-provoking as any history book you will ever read. . . . Can&;t recommend it highly enough.&; &;Glenn Greenwald, The Guardian&;Finally, a book with the guts to challenge the accepted narrative of recent American history.&; &;Bill MaherThe New York Times bestselling companion to the Showtime documentary series now streaming on Netflix, updated to cover the past five years.A PEOPLE&;S HISTORY OF THE AMERICAN EMPIREIn this riveting companion to their astonishing documentary series&;including a new chapter covering Obama&;s second term, Trump&;s first year and a half, climate change, nuclear winter, Korea, Russia, Iran, China, Lybia, ISIS, Syria, and more&;Academy Award&;winning director Oliver Stone and renowned historian Peter Kuznick challenge prevailing orthodoxies to reveal the dark truth about the rise and fall of American imperialism.