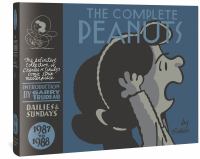 Collects all the "Peanuts" comic strips published from 1987 to 1988 in newspapers, including both daily and Sunday strips.

Collects all the "Peanuts" comic strips published in newspapers from 1987 to 1988, including both daily and Sunday strips.

So what do we have for Peanuts fans this time around? An ill-considered attempt at flirting sends Charlie Brown to the school doctor... Linus’s ongoing romance with the too-young “Lydia” of the many names continues... Snoopy is joined in the trenches by his brother Spike... Sally engages in a career as a playwright by penning the school Christmas play but mixes up Gabriel and Geronimo... A hockey mishap sends Snoopy to the doctor for knee surgery, in a (clearly autobiographical) sequence that lasts only until everyone figures out that dogs don’t have knees... Linus and Lucy’s kid brother Rerun begins to take on the greater role that will lead to him being one of the dominant characters in the 1990s... and Snoopy, inevitably, writes a “kiss and tell” book. As we reach the 19th (!) book in this epochal, best-selling series collecting arguably the greatest comic strip of all time and head toward the end of the 1980s, Charles Schulz is still as inventive, hilarious, and touching as ever... and this volume even features a surprise format change, as the daily strip switches from its trademark four-square-panels format to a more flexible one-to-four-variable-panels format which, along with Schulz’s increased use of gray tones, give this volume a striking, distinctive look.